Today, organizers across the Gorge successfully ended NORCOR’s contract with ICE (Immigration and Customs Enforcement), the last ICE contract with a jail in our state. This is a huge victory for immigrant justice in Oregon and the entire nation!

It has taken years of on the ground organizing and multiple concrete victories to get to this point. In May of 2017, people detained inside of Northern Oregon Regional Correctional Facility (NORCOR) went on a hunger strike to protest the dismal conditions inside the jail and the immoral contract that NORCOR held with ICE. ROP reached out to local leadership in the Gorge and together we kicked off daily rallies outside of the jail, published daily press releases, prepped media spokespeople, we set up a visitation program, a phone line and organized a call for donations to put into strikers’ phone accounts so they could keep us, their families, and their lawyers updated. 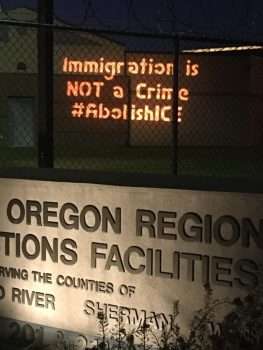 Since then, immigrants and refugees detained at NORCOR organized a second hunger strike, and we have collaborated with Innovation Law Lab, Oregon Law Center, and the ACLU to bring multiple lawsuits against the jail. Together we ended transfers from the jail side of NORCOR into ICE custody and won access to warm and nutritious food, outdoor exercise, timely medical care, and visits with family. In support of the powerful demands coming from organizers inside NORCOR, leaders in the Gorge and across rural Oregon have held marches and rallies, met with county commissioners, and organized community events to demand that this local public institution play no role in detaining and deporting people.

On Thursday, August 20th, at noon, NORCOR’s Board of Directors voted unanimously in support of ending the jail’s adult and juvenile contracts with Immigration and Customs Enforcement. NORCOR Community Resources Coalition, Gorge ICE Resistance, and other key groups in the ROP network have spent years organizing, strategizing, and advocating toward this moment. We must celebrate their hard work and the incredible support that member groups across the state have provided to this effort to end immigrant detention in the state of Oregon. This victory was in no small part pushed across the finish line by the massive public response to ICE detaining two men last week in Central Oregon and the violence that Federal agents inflicted when protesters put their bodies in the way of the ICE buses. While this is not the end of our movement to dismantle systems of detention and deportation across our state and our country, we see today that when we rise up, we will win! Now we turn our work to #FreeThemAll towards the GEO Group’s private Northwest Detention Center in Tacoma, where confirmed cases of COVID-19 are growing by the day.

Ready to Celebrate? Inspired to Organize?