Communities across the country have been in an uproar after Postmaster General DeJoy put into motion plans to cut hours, remove post boxes, slow down the mail, and dismantle the ability for the United States Postal Service to deliver ballots during the COVID-19 pandemic. Rural Oregonians are familiar with this decades-long campaign by the Right to hinder, dismantle, and privatize the USPS because we have joined together to fight post office and distribution center closures across the state for years. This moment calls for us to join together again to fight this attack on the USPS and to call for the expansion of postal services!

Join folks across the state by taking action this Saturday at 11am in front of your local post office to show your support for the USPS!

For those of us living in rural communities, the postal service is a crucial lifeline. Instead of driving sometimes hours to the nearest town with a pharmacy to fill prescriptions, many 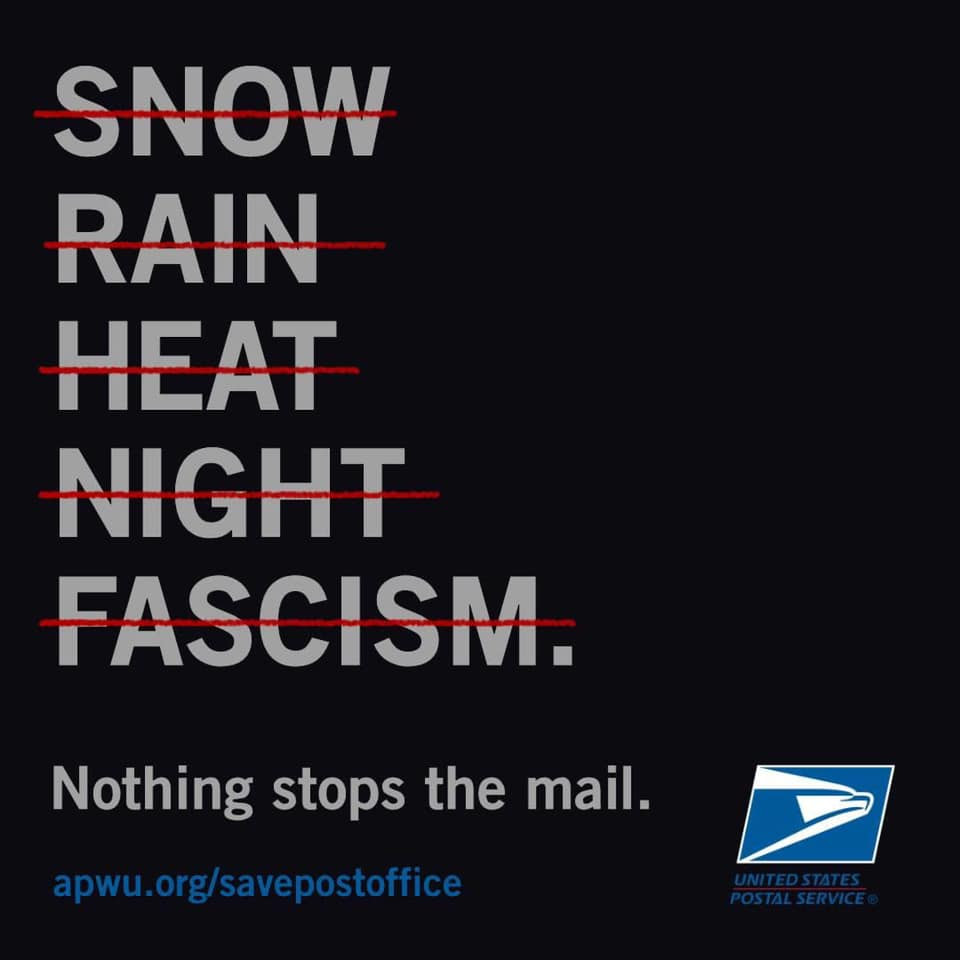 receive their prescriptions in the mail. Folks who don’t have access to broadband internet use the mail to conduct business and pay bills. For many communities that don’t have reliable phone lines and no cell reception, mail is the only way to communicate. Farmers and ranchers rely on the postal service to deliver goods, soil samples, and more. Many local newspapers rely on the postal service to get the news out to the people quickly. With the right leadership, the USPS could be expanded to offer postal banking, broadband internet access, and other services that would serve rural communities!

Folks have called and written their elected officials, held actions, sent letters to the editor, and taken to social media to demand that the USPS be expanded to more fully serve rural communities – and it’s working! The USPS has announced that their plans to cut hours and post boxes are postponed until after the election and a slate of Oregon lawmakers have called out DeJoy’s diabolical plan to hurt the people’s ability to vote this November. That said, the damage has already been done, and it’s up to us, the people, to ensure our Constitutionally-guaranteed right to the USPS is maintained!

There are many reasons why DeJoy and Postmaster Generals before him attacked the USPS, but here are two: the USPS is one of the largest unionized workforces in the country, and one of the largest employers of Black people in the US. The USPS hasn’t been funded by taxes since the 1980s and instead relies on sales to make its budget. In 2006, Congress passed a law that forced the USPS to pre-fund retiree benefits 75 years in advance, a move that was designed to intentionally hurt the USPS so it could be weakened and then privatized.

Access to information and the ability to communicate are cornerstones of a strong democracy. Let’s join together to rally for our postal service this Saturday, August 22nd at 11am in front of your local post office!

Send ROP your photos so we can share them with others across the state! Really fired up? Record yourself and your neighbors explaining why you care about saving the USPS for us to share in the next episode of Rural Roots Rising! Not sure how to get started? Reach out to your friendly ROP organizer! And keep your eyes open for a ROPnet coming soon about upcoming strategy sessions to save the USPS and rural post offices, to ensure every Oregonian can vote, and more!