The War At Home and Abroad

A few weeks ago we sent you a message looking at the war abroad and what is likely to be endless war into the next presidency.  You can read that ROPnet here.

Today is the National Day of Protest Against Police Brutality.  Let’s talk more about the face of the war at home.

A recent article on theFreeThoughtProject.com revealed that the number of people murdered by police in the last 10 years is higher than the number of US soldiers killed in the Iraq war:

In the last decade alone the number of people murdered by police has reached 5,000. The number of soldiers killed since the inception of the Iraq war, 4489.

It also reveals that you are 29 times more likely to be killed by a police officer than you are by a terrorist.  Check out the full article here.

Couple this with the surplus military equipment that is now being gifted to local law enforcement in counties across the country and we have the makings of a war at home.

Mapping the Spread of the Military’s Surplus Gear 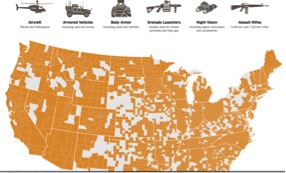 Deschutes County, for example, now has 40 assault rifles, 40 body armor pieces, 30 night vision pieces, 3 grenade launchers and 1 armored vehicle.   Clackamas County has several of the above and a mine resistant vehicle as well. Click on the above image for details about your county.

For years ROP and human dignity groups have been making the links between the wars abroad and the wars at home: exposing policies that bomb other countries and deport people of color immigrants (now over 2 million deportations since Obama became President).  In addition, human dignity groups in over a dozen counties have been engaging their local sheriffs in conversations – and applying pressure – around local sheriff’s relationships with Immigration and Customs Enforcement.  This pressure helped win national news this year as Oregon sheriffs all over the state publicly stated they will no longer honor ICE holds without a warrant, meaning they will no longer keep someone in jail just so ICE can come pick them up. This is a huge victory.

With eyes and ears on Ferguson and press covering the murders of young black men by local law enforcement (and police officers getting off without so much as a trial), now is the perfect time to push for a shift in our national psyche. This is a real opportunity to take our work exposing the wars at home and aboard to another level.

One big outcome of the most recent ROP Tour with Walidah Imarisha on “Why Aren’t There More Black People in Oregon?: A Hidden History” is interest in engaging local law enforcement on what systems they have in place to address violence and injustice against people of color, immigrants, people with mental illness and addressing local militarization.  Questions include:

ROP is putting together a Kitchen Table Activism that provides the tools and questions to sit down with your local law enforcement.  What questions would you add to the list?

Send us your thinking by emailing cara@rop.org.

PS- And don’t forget! The Rural Oregon Listening Project is under way! The best way to know what is happening in our communities is to ask! Download the survey here in English and Spanish and help collect information and stories on the experiences of low income folks and communities of color in our local communities.  ROP will compile results for the state and share information back with your group about the survey results in your county. Email Jessica@rop.org for more information or call 503-543-8417.  We have already collected over 150 surveys – let’s reach 500.