Over this past year, human dignity groups across rural Oregon have been leading inspiring and visionary organizing. Just yesterday, Unidos Bridging Communities, in partnership with other local and statewide groups, organized a vigil with over 1,200 people at the federal prison in Sheridan. Groups from Yamhill, Marion, Polk, Deschutes, Linn, Multnomah, Columbia, Lane, Clackamas and Wasco Counties showed up in solidarity with the 123 immigrants and refugees yesterday. 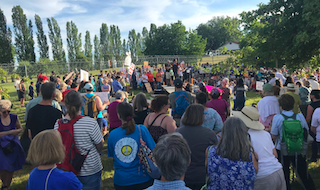 Detained by Immigration and Customs Enforcement (ICE) and incarcerated at the Sheridan Federal Correctional Institution (FCI), these folks–many of whom arrived seeking asylum–have been torn away from their children and separated from those who speak their language. Congratulations Unidos and all who joined in the massive effort to push back against the Trump administration’s “zero tolerance policy” and the inhumane incarceration of immigrants and refugees. Unidos is one of many rural human dignity groups across the state rising to this moment and organizing neighbors to speak out against injustice.

We are thrilled to give out four Human Dignity Awards this year to Maria Mejia Botero of Jefferson County, We All Belong Here of Coos County, Economic Community for Healthy Opportunities (ECHO) and Students Participating and Rebuilding Community (SPARC) in Echo, Umatilla County.

Read on to learn more about these passionate and powerful rural groups and leaders.

On our 25th Anniversary, in memory of our founder and in honor of her life’s work, Rural Organizing Project established the Marcy Westerling Award. In 1992, Marcy’s brilliance sparked a movement for human dignity in rural Oregon. Marcy believed that rural people have the power to change our own communities and the world. Her organizing strategy prioritized innovation and approaches that bridge false political divides. Marcy’s legacy lives on through the work of ROP staff and board, human dignity groups and rural leaders across the state of Oregon and beyond. We are honored to present the 2018 Marcy Westerling Award to Maria Mejia Botero. 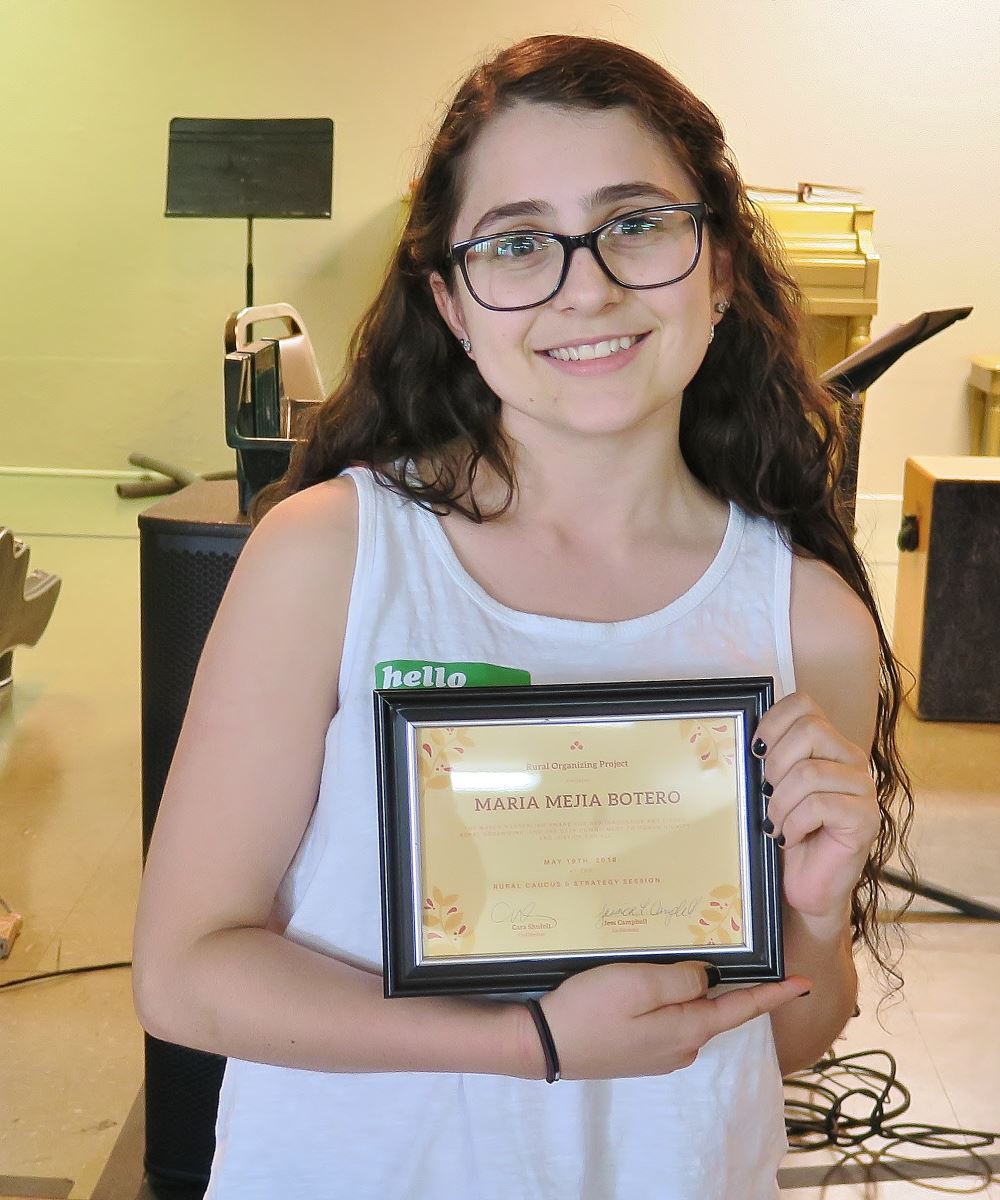 Maria Mejia Botero is a brilliant and courageous organizer in Jefferson County who cares passionately about her community and the dignity of all who live there. She listens deeply, responds thoughtfully and brings humor and joy to her work. Maria helped found the Jefferson County Human Dignity Group and Rapid Response Team, a group prepared to respond to ICE encounters that threaten immigrant families and hate crimes against LGBTQ+ and other marginalized members of the community. When a homophobic slur was painted onto the side of a local church, the rapid response team jumped into action immediately. Maria and her mother went and spoke with the pastor to offer the support of the rapid response team in painting it over, and used it as an opportunity to talk with the pastor about how to open a dialogue within the faith community about what it means to be a welcoming and inclusive place for all. This year, with the support of friends and community advocates, Maria started Culver High School’s first GSA Club for queer and ally students! She also helped to lead Culver High School’s first walkout on March 14th. Over the past year Maria has taken on more activism and community involvement, particularly on issues surrounding LGBTQ+, immigration, and school safety. Maria is grateful to Lorene Foreman and the Teen Book Club for opening her mind to social justice issues, mentors and friends in the Let’s Talk Diversity Coalition and in ROP, and her mom–who is always actively supporting and working alongside her. 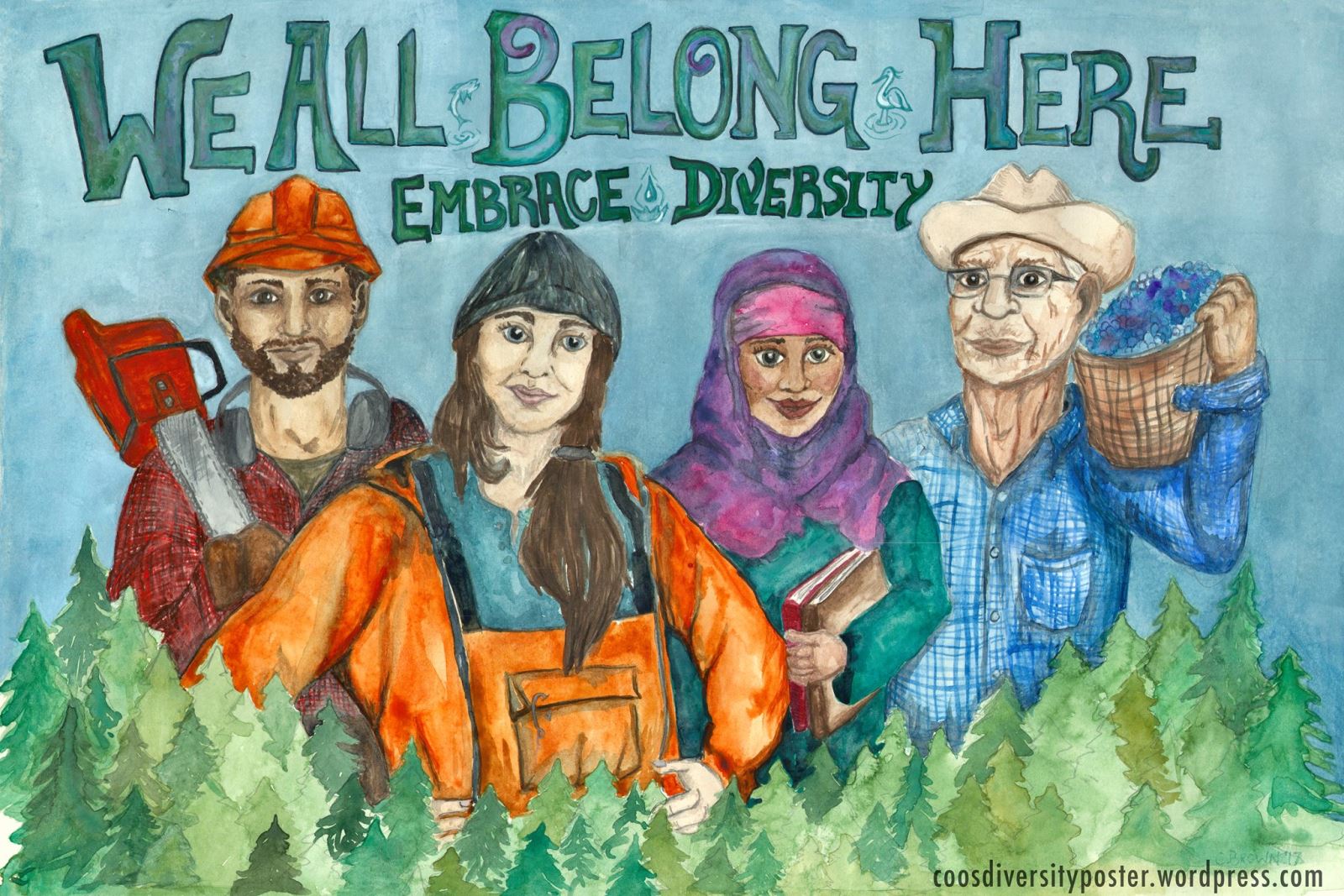 We All Belong Here Coalition (WABH) is a leading force of support, strength, and inspiration in Coos County. WABH formed in 2017 in response to harassment, assault, and discrimination of members of the LGBTQ+ community in Coos County. When a local trans woman was threatened at knifepoint and local authorities failed to respond, the community organized and quickly discovered this was not an isolated incident. Similar stories throughout the county emerged. Local high school students shared stories of discrimination, harassment, and brutal attacks that left one student’s arm broken. They spoke of apathy and hate from the administration – from a teacher declaring, in the classroom, that gay marriage was no different than marrying one’s dog, to little or no response from the administration. In less than a year, WABH has demonstrated their commitment to community by forming a rapid response team, holding security, deescalation, and bystander intervention trainings, initiating a “We All Belong Here” local business poster campaign, providing a community resource guide, and pressuring local law enforcement to sit down and hear community members. WABH also supported the local high school students in filing a complaint against the school district for discrimination, resulting in the termination of the principal. WABH not only initiated a community response to hate and harassment, but through their ongoing organizing have committed to maintaining the work of organizing for a safe and welcoming community for the long haul.

Last spring, neonazis in the mid-Willamette Valley began showing up more visibly in Corvallis to disrupt events focused on social justice. They put up flyers around town, stickers on people’s cars and chalk on the sidewalks with racist and xenophobic messages to harass local folks, draw attention and recruit for their white supremacist groups. Local leaders immediately hopped on the phone to figure out a plan, starting with removing the stickers, flyers and chalking and replacing them with messages of love and inclusivity. They also set up meetings to share information about what they were experiencing and learning and to think together about how to respond to the immediate threats while also building the kind of community where white supremacy couldn’t thrive. As part of these ongoing conversations, they decided to form a new group called Rapid Action Community Response (RACR) and committed to act in the following areas: 1) Challenging and exposing white-supremacist activity and organizing, 2) Offering watchful hospitality at community events and accompanying individuals feeling threatened, 3) Offering legal observation skills and assistance to houseless individuals who are harassed or mistreated and 4) Supporting justice for immigrants, including monitoring and responding to ICE threats or raids in the community. At this year’s Rural Caucus and Strategy Session RACR trained dozens of local leaders in Watchful Hospitality, sharing their lessons learned with human dignity groups across the state. 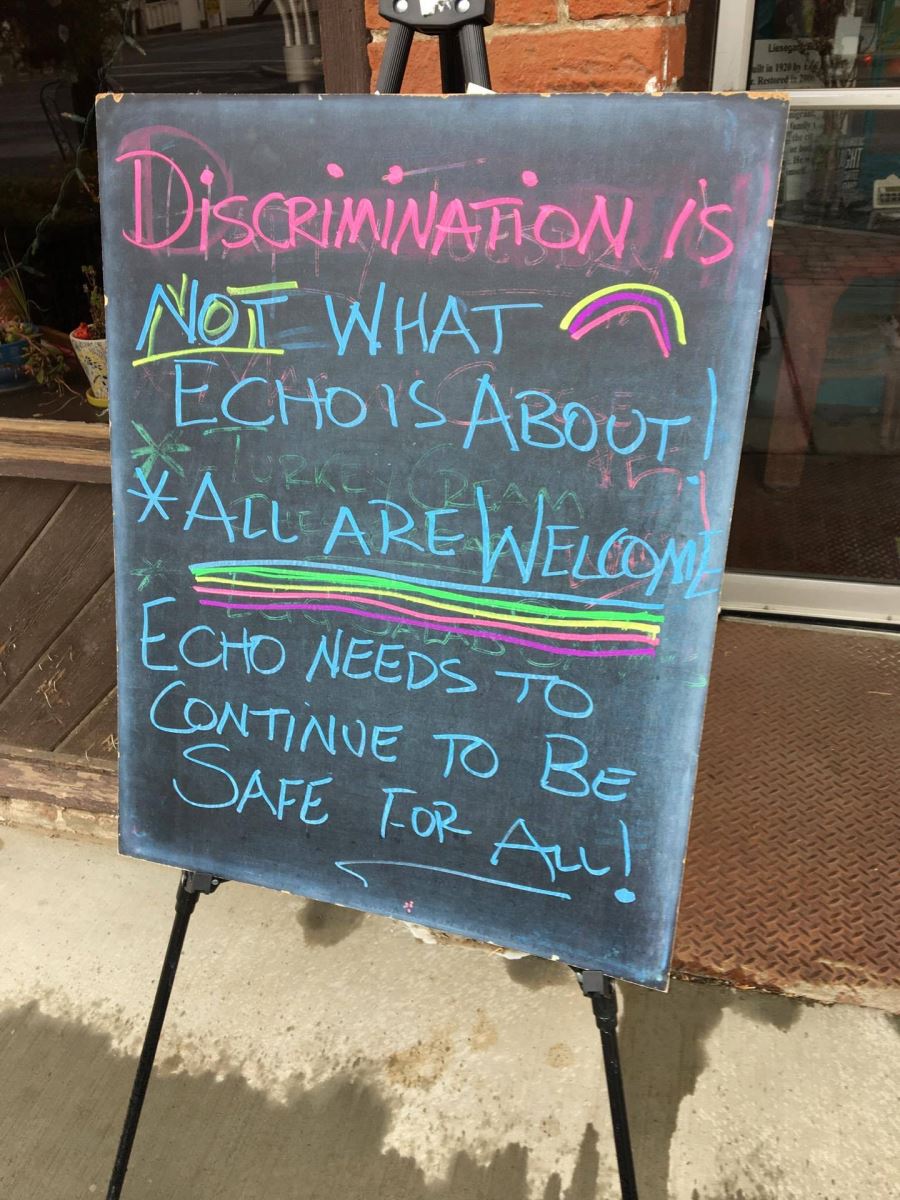 In the small town of Echo, in Eastern Oregon, business owners, concerned community members, students, long-time residents and others formed Economic Community for Healthy Opportunities (ECHO) to advocate for human dignity, inclusivity and democracy at the city level. The group came together after a city councilor in Echo made violent and hateful anti-LGBTQ comments online targeted at a gay filmmaker. Community members immediately responded by attending city council meetings, posting signs in their businesses, holding conversations with neighbors and students and submitting letters-to-the-editor calling for an apology. Many received backlash for their actions, including businesses being boycotted (and boycotts being called for by city employees during working hours!), but this did not deter them. These same leaders then helped form ECHO (the group!), bringing community members together to address the lack of democracy at the local level and to organize for a more inclusive town. ECHO has been a force and a vision for a better community where everyone can feel safe and welcome. 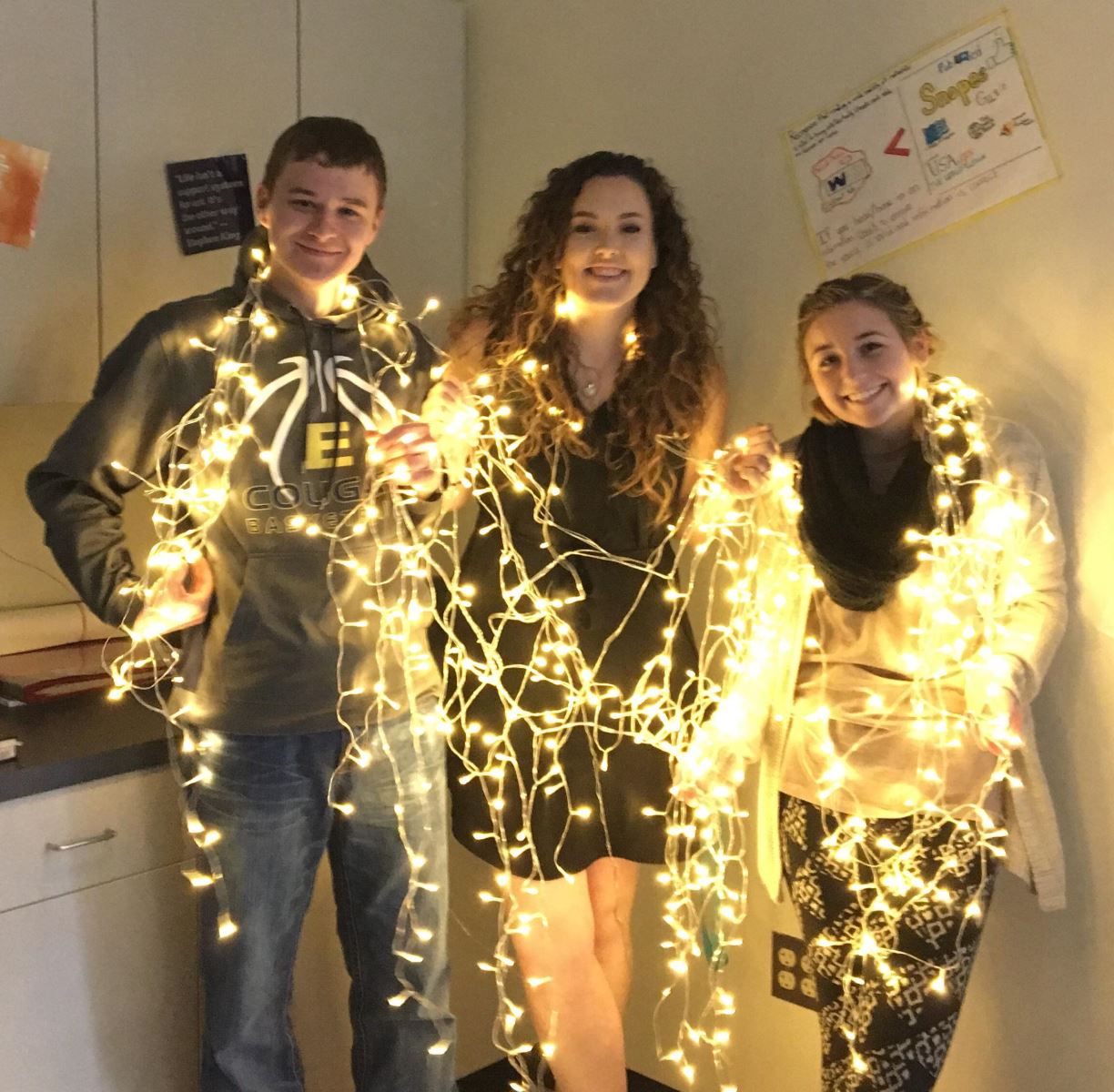 ECHO was not the only group that formed in response to the violent statements of the city councilor and the resulting actions, and lack of action, from the city. High school students also decided it was time to take action! Several students got together and formed Students Participating and Rebuilding Community (SPARC), a club at the high school that aims to strengthen the voice and message of justice-oriented students at school and in town, to increase youth participation in local government, and to build a more welcoming and inclusive community for all. Even amidst push back and barriers created by school administrators, city councilors and community members, they have persevered and SPARC successfully held a March for School Safety event including a walkout. Next they are planning a fall festival to celebrate their small town and start conversations with neighbors about diversity and inclusion.

We are moved by all the groups who are leading work for rural justice. They carry us forward in our movements, and foster new ways of working and being together, building networks of mutual aid and community care, and building power locally to transform our communities.

Thank you to all the human dignity groups leading in your communities across rural Oregon.