As events continue to unfold at the Malheur National Wildlife Refuge in Harney County, we invite you to share this statement from the Rural Organizing Project with your local press and folks in your community.

Scroll down to read a powerful article from the Oregon News Service that shares some context about what people on the ground in Harney County are feeling, experiencing, and digesting as a community.

The Rural Organizing Project condemns the armed occupation of the Malheur National Wildlife Refuge as a publicity stunt by militia groups from outside of Oregon to further their own ideologically-driven agenda. The activities of the occupiers ignore and disrespect the local community’s calls to handle the situation peacefully.

This stunt distracts from the real and pressing economic crisis that the residents of Harney County and much of rural Oregon face. Jobs have disappeared and no new economic engine has replaced the old economies based on natural resources. Public services like schools, libraries, public safety, and public transportation have been defunded for years, leaving communities without basic services. Militia groups in many parts of rural Oregon are using this crisis as an opportunity to grow and recruit new members in the vacuum left from the destabilized infrastructure, positioning themselves as alternatives to public services.

Communities who have been suffering from this economic crisis are now being subjected to an increasing atmosphere of tension and potential violence. We need to focus on meaningful investment in rebuilding public infrastructure so that the residents of Harney County have the support they need on a day-to-day basis. In a county that is so underfunded that many areas do not have reliable access to basic public services, we need real solutions for the community, not distractions.

The Rural Organizing Project (ROP) is a statewide network of over 50 autonomous locally-based groups in rural and small town Oregon that work to promote human dignity: the belief in the equal worth of all people, the need for equal access to justice, and the right to self-determination. ROP’s most important work is to build the power of local groups to organize for change in their communities. ROP connects leaders and groups through collective action for inclusive democracy and shared organizing for racial, economic, and gender justice. You can find more information at www.rop.org.

Harney County to Armed Militia: “Go Home to Your Families” 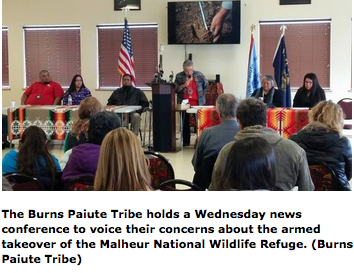 BURNS, Ore. – Anti-government protesters occupying the Malheur National Wildlife Refuge near Burns may be getting the lion’s share of publicity, but residents of Harney County are making some efforts to amplify their voices as well.

Petitions are circulating among the locals requesting that the armed protesters “go home to their families,” and members of the Burns Paiute Tribe held a news conference to say having an out-of-state militia in the area has been disruptive for the county.

Jessica Campbell, organizing director with the Rural Organizing Project, is in Burns.

“The Paiute have land out there that they can’t access for hunting and gathering medicine right now,” Campbell said. “The press conference was really powerful, having folks stand up and say, ‘You know, this was really our land once. You want to talk about land disputes?'”

The petitions, which say the protest action “is not welcome,” were shared with the Harney County Sheriff at a late-afternoon meeting on Wednesday.

Campbell described the mood as tense. Burns area residents she has spoken with are concerned about schools being closed as a safety precaution, leaving many to pay for child care or take time off work. She said the post office is the only government building open for business.

“It feels so adversarial, considering the collaborative relationships that local ranchers have with federal agencies that manage the land out here,” she said. “And Harney County is one of those counties where a huge amount of the population is actually employed by the government.”

The militia members have said they want federal land in the county turned over to “ranchers, loggers and miners,” and that they’re researching whom that might be. The wildlife refuge land they’re occupying used to be private ranch land, but was sold to the federal government in the 1930s.