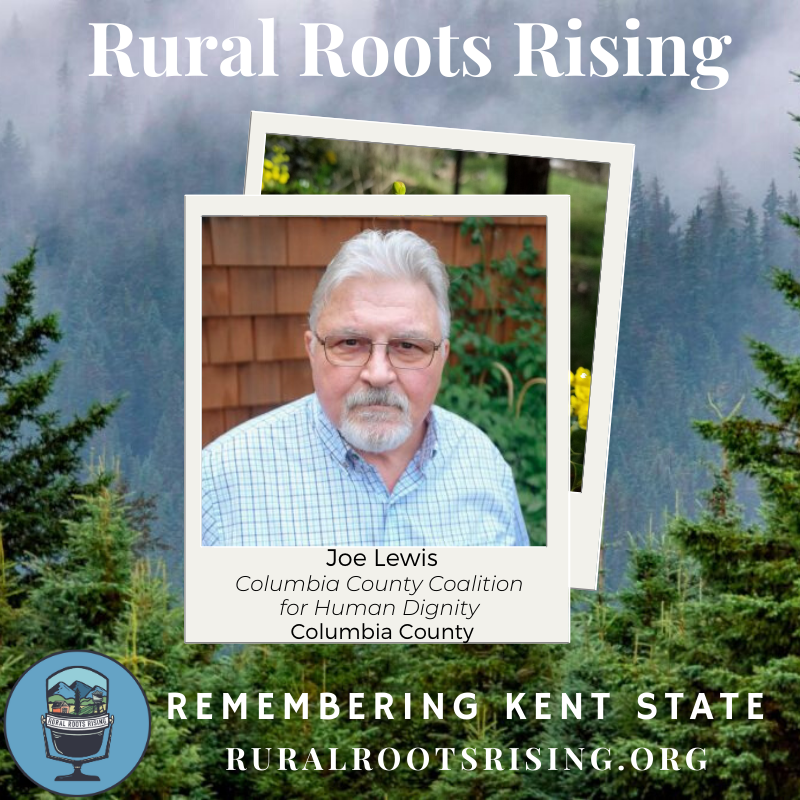 As protests of police violence against Black Americans continue across the country, we have witnessed large scale police and National Guard deployment, many outfitted with intimidating and sophisticated warfighting gear. Countless videos have shown police officers and the National Guard using batons, tear gas, pepper spray and rubber bullets on protesters, bystanders and journalists, often without warning or seemingly unprovoked. 2020 marks the 50th anniversary of the Kent State attacks, reminding us that militarized violence is nothing new and has shaped our country, just as there have always been those who refuse to be silenced.

Today we are sharing a special episode of Rural Roots Rising, Remembering Kent State, featuring the story of Joe Lewis, one of nine peaceful student activists who was wounded in the National Guard’s attack on nonviolent protesters of the Vietnam War at Kent State University on May 4th, 1970. Four students were also killed that day: Allison Beth Krause, Jeffrey Glenn Miller, Sandra Lee Scheuer, and William Knox Schroeder.

Listen to the episode below!

The Vietnam era was a tumultuous political time. The nation was already sharply divided, and the Kent State shooting solidified that gulf. Student strikes followed nationwide and hundreds of colleges and universities closed. Some historians argue that Kent State was a leadup to Watergate, which would eventually lead to the end of the Nixon administration. With the support of the ACLU, the families of the students who were killed or wounded filed a wrongful death civil lawsuit against Ohio’s Governor, James A. Rhodes, and 52 national guard commanders and troops.

Years after Kent State, Joe moved to Oregon where he became a leader with Columbia County Coalition for Human Dignity and now sits on the ROP Board of Directors. At a recent Rural Organizing Project Board of Directors retreat, Joe sat down with us to share his story. To read more about this history, Joe recommends the books Kent State; Death and Dissent in the Long Sixties by Tom Grace and Truth About Kent State: A Challenge to the American Conscience by Peter Davies. For movies, he recommends Fire in the Heartland and The Day the War Came Home. Kent State is hosting a fiftieth-anniversary virtual commemoration online, including a teach-in in partnership with the Kent State Truth Tribunal.

Rural Roots Rising is a monthly radio show and podcast made by and for rural Oregonians who are creatively and courageously building stronger and more vibrant communities for a just democracy. You can listen to Rural Roots Rising on Apple Podcasts, Spotify, or at ruralrootsrising.org. This special episode was produced with help from Tyler Mac Innis. Thank you, Tyler! To learn more about this podcast and how to get involved or share your story of powerful rural organizing, email us at info@ruralrootsrising.org. We’d love to hear from you!

Warmly,
Meredith and the ROP team