Newsflash!  Postal workers from across the country, including one of our Portland allies, are hunger-striking in DC to demand Congress to stop starving the USPS!  Read all about their provocative actions here!

Due to the mounting pressure from rural America, the United States Postal Service scrapped its original plans to immediately close rural post offices, and in mid-May changed their tactic to immediately cut hours at 124 rural Oregon post offices – nearly one-third of Oregon’s post offices – which Postmasters, unions, and postal worker associations agree is the first step in the march toward closure.  This new plan, the POStPlan, not only goes after rural post offices but also mail processing centers and impacts nearly 50,000 jobs.

From our Occupy Our Post Offices work, we know a strong, vocal response is rewarded.  Monday, July 9th, communities across Oregon will be holding Return To Sender rallies to send a clear message: we support our local postal workers and we want our Constitutionally-mandated postal service!  Communities will be sending postcards to Congress, to the Oregonian, and to the Postmaster General demanding that Congress fix the core funding issue – the mandate that the USPS must prefund benefits 75 years in advance – instead of sweeping rural America under the rug.  These rallies in Lane, Benton, Wasco, Marion, and other counties will be kicking off the rural Return to Sender campaign this summer.   Will you join us?

Read more about this summer’s Return to Sender campaign, a Small Town Organizing Victory and Strategy, and background information with more specifics on this new assault below.  Let us know how your community can join in this summer!

Rural Oregonians are standing up and fighting to keep Oregon connected! We will not sit idly as the USPS introduces a longer-term gameplan for eliminating living wage jobs and crucial community infrastructure.  Coordinate a rally in your community for Monday, July 9th!  Join in the effort this summer by rallying another day or collecting postcards in your town.

Here are some resources to make your organizing manageable and fun:

Want to know more?  Here are some resources to educate your community about this latest assault:

One fun (and simple!) example of a July 9th Return to Sender rally in Lane County: 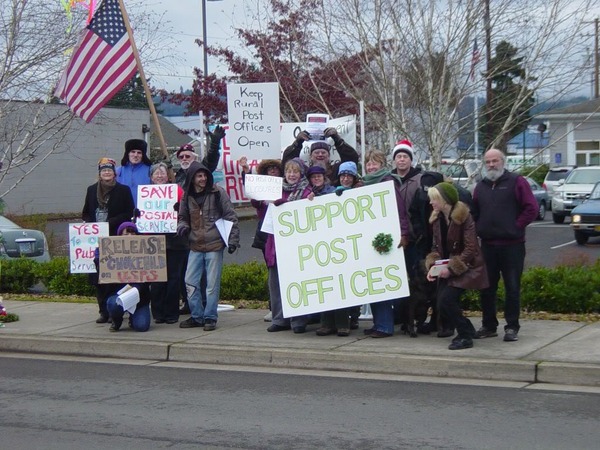 Occupy Cottage Grove, building on their momentum from organizing an Occupy Our Post Office action in December, will hold a “rolling rally” beginning at the Dorena Post Office 13 miles outside of Cottage Grove, which serves a remote Elementary School and will lose half of its hours if this plan succeeds.  Occupiers will then roll into the Cottage Grove Post Office and conclude in 13 miles away in Lorane, which will also be reduced from 8 hours to 4 hours per day under the proposed plan.  Both Dorena and Lorane serve large unemployed, self-employed, impoverished, and aging communities who will be severely affected by hour cuts.  At each stop they will collect postcards and take photos with a giant “Return to Sender” postcard.

No Safe Place for Privatizers in Rural Oregon:
A Model to Build From: Lessons from Summer Lake Organizing

Collecting postcards and rallying in front of post offices is only one tactic in our Return to Sender campaign strategy.  The POStPlan touts that the USPS will hold “community meetings for public input” in every community facing hour cuts.  Rural Americans organized around these “community meetings” last fall after the initial closures were announced, and they won incredible victories for their boldness!

We are adapting a model for responding to this new assault based on the incredible organizing of Summer Lake, a rural community in Lake County, Oregon, who not only saved their post office from closure last fall, but they’re actually seeing an increase in hours.

When they saw the notice for a “community meeting for public input” in the Summer Lake Post Office, they immediately started organizing.  The USPS set a date and time that most Summer Lake residents could not attend, so Summer Lake got to work rescheduling their meeting for a time that worked for them.  They chose a location that they k new they could fill to capacity and they got to work doing community outreach! They raffled off a $50 gas card, which is how much it would cost to get to the next town with a post office to pick up their mail, and they convened an hour before the meeting to make sure that their most eloquent speakers had their points in order.

Once the USPS community meeting came around, a retired state trooper took on the role as facilitator, which ensured that every single Summer Lake resident had their questions addressed by the USPS representative.

The USPS wanted public input, and they got it!  Summer Lake addressed the demographics and how reliant their community health is on the postal service, connectivity and lack of access to internet, the impact on local businesses, and they even printed out the USPS map where Summer Lake is mislabeled 50 miles away.  Soon after, the USPS announced that Summer Lake’s post office was safe!

This summer, ROP will be helping communities track and organize around the new community meeting plans for Post Office cuts and closures.  Whether your group wants to schedule its own meeting with a chosen local facilitator, or you just want to know what strategic and provocative questions to ask at your community meeting, ROP will be providing the tools and resources to make sure your community goes on record with a “Return to Sender” message.  Stay tuned for the Return to Sender Campaign Toolkit!

Back in mid-May the United States Postal Service scrapped its original plans to immediately close rural post offices, and instead changed their tactic to immediately cut hours at 124 rural Oregon post offices, which Postmasters, unions, and postal worker associations agree is the first step in the march to closure.  Dubbed the POStPlan, this new plan focuses on forcing 21,000 unionized, career Postmasters out of their positions (even offering $20,000 to take an early retirement) and reducing the services provided at rural post offices.   With limited hours comes less revenue, which will allow the USPS to justify closure.  Four of Oregon’s mail sorting facilities are scheduled to be closed January 2014.

As with many of our dwindling social services, this march toward privatization follows the same path: the funding is cut, the service quality drops, the system buckles, and privatizers point at the broken system to justify corporations filling those roles.  In this case, Congress passed the Postal Accountability and Enhancement Act in 2006 that forces the USPS to prefund employee benefits 75 years in advance, forcing the USPS into this manufactured financial crisis.

Our voices from across rural America were heard loud and clear, which is why the USPS has changed their tactic and adopted our very language, calling for the “preservation of rural identity.”  We have seen incredible success, and now we must keep up the pressure! 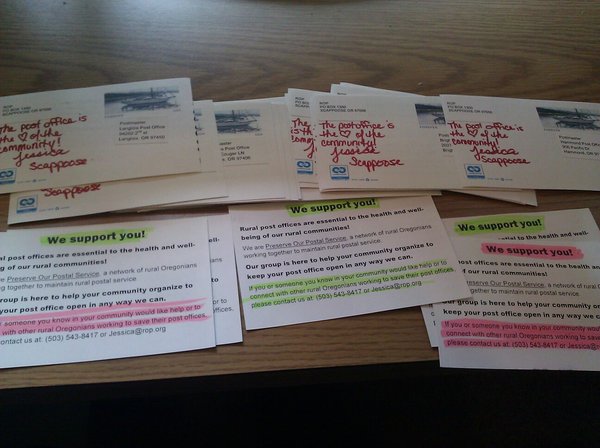 Preserve Our Postal Service kicked off their organizing by sending postcards to every Postmaster in an affected post office in Oregon declaring our support for them, their role in their community, and that we are here to help their community organize!