Wednesday afternoon, I found myself in a hotel parking lot in Bend with a crowd of at least 100 people surrounding two ICE transportation buses holding captive two central Oregonians who were detained by Immigration and Customs Enforcement (ICE) at 5 am. The families and children of the two men held inside the buses stood up against the windows, communicating with their loved ones as best they could through the thick walls, making the most of the opportunity to communicate and say goodbyes in-person while they could. 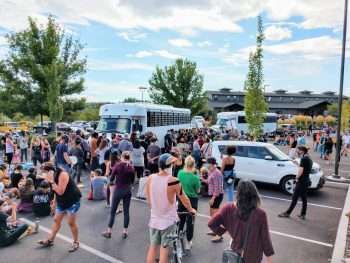 Despite Oregon’s Sanctuary Law that clearly bans the use of local resources for the enforcement of federal immigration policies, Bend police and members of their SWAT team threatened to move in and arrest protesters to clear the way for the buses to leave, but local organizers called the hotel owners and convinced them to give permission for us to stay. Questions circulated about Mike Krantz, the controversial new Chief of Police in Bend, who has been on the job less than a week.

The crowd doubled seemingly every hour and I was surrounded by the familiar faces of ROPers! Word spread like wildfire across Central Oregon as Mecca Bend, Mercado Hispano Libre, Central Oregon Peacekeepers, Central Oregon Diversity Project, Sisters Fight for Social Justice, ROP, and Central Oregon human dignity group leaders shared information out over social media. Mecca Bend and Latino Community Association staff connected directly with the families to offer support and make sure that their direction was being followed by the protesters. Their families quickly got connected with a local immigration lawyer and Innovation Law Lab out of Portland, and together they worked as fast as they could to file for a Temporary Restraining Order to keep the two men in Central Oregon.

As unconfirmed rumors spread about ICE activity across Central Oregon, ROPers and community leaders across the region checked out locations to confirm or deny ICE activity and Central Oregon Peacekeepers and Latino Community Association reported back to the community to calm fears. At the same time, Central Oregon organizers and leaders called their local police chiefs, mayors, and city councilors to remind them of their commitment to being Sanctuary Cities and of Oregon’s Sanctuary Law, which bans local public resources from being used to support federal immigration enforcement.

Frustration mounted at Mayor Sally Russell told protesters to go home and let ICE “keep our community safe.” City Councilor Barb Campbell arrived and parked her car between the two buses along with multiple other cars blockading their exit. Around 6:00 pm, several of us cooked up a plan to hold a press conference. As we quickly wrangled two city councilors, two parks and recreation board members, and Deschutes County District Attorney John Hummel in front of the TV cameras, I found the go-live button on ROP’s Facebook page (realizing as I looked for it that I had never done this before). While Mayor Sally Russell tweeted that the two community members held on the bus had “warrants out for their arrest,” both the District Attorney and City Councilors present said they did not know if they had been issued a warrant of any kind. Even if ICE did have a warrant, more often than not ICE warrants are not signed by a judge and are issued for the civil infraction of crossing the US-Mexico border without permission. ICE and Border Patrol have been tearing apart communities across the country for years, often using extremely violent and illegal tactics to detain and deport migrants, refugees, and asylum seekers. While Oregon State has a Sanctuary Law that makes it clear no local law enforcement or resources shall be used to aid federal immigration enforcement, local law enforcement across Oregon continue to illegally work with ICE, Border Patrol, and the Department of Homeland Security. Eye-witnesses in Bend saw ICE officers exiting their unmarked Suburbans and getting into Bend Police cars. Bend Police Department allowed the federal agents to charge their phones in city cars and drove them around town.

A friend of both families set up fundraisers for the families to help with legal costs, keeping food on their tables, and roofs over their heads (they can be found here and here), and protesters formed a shield between the family and the news cameras so they could not be filmed. Family members lifted the kids up to the windows of the bus so that they could say goodbye and tell their dads, “papa, I love you.” We walked families into the hotel to use the bathroom and exchanged contact info to make sure that whatever happens, these families will not go hungry or lose their homes. By this point, the crowd was at least 1,000 people strong.

Once the police realized they would be unable to arrest the 1,000+ protesters without immediate backlash from the public, the question became: how long will this last? Innovation Law Lab filed their Temporary Restraining Order with the Court at some point that evening, but we did not know when a judge might rule. As folks started to set up camp for the night, protestors convinced the police to pressure the bus drivers, who wore GEO Group uniforms and are private contractors, into allowing those detained inside to have food and water for the first time since their detention over 12 hours earlier.

As night fell, we heard that more federal agents were headed our way. Tensions began to grow. How many agents? When would they get here? Would they grab people off the street and put them in unmarked cars like in Portland? Would they surround the entire crowd and arrest everyone? No one knew. Later, District Attorney John Hummel informed us that at this point in the night he had tried to broker a release of the two people detained but when he had finally worked his way up through the ranks to the second in command in the Department of Homeland Security, he was told the decision was being made at the “highest level of government,” and they “did not want a peaceful resolution.”

Around 10:30 pm, local police confirmed ICE was on their way and that Bend police would not interfere with federal law enforcement because we were blocking a federal bus. Bend police and Mayor Russell, who had only recently arrived, fled the scene. National Lawyers Guild was on call to provide legal support to protesters. Organizers began using a bullhorn to build a plan for civil disobedience, one in which protesters would sit peacefully and not move until arrested. It was important we all had agreement and knowledge. We passed out sharpies and distributed the number for the National Lawyers Guild support line while lawyers in the crowd provided information about the heightened risk for people without citizenship.

People began sharing information: “the federal agents are at Les Schwab Amphitheater,” “there are two sprinter vans,” “there are snipers on the roof!” Over the bullhorn, someone shouted “They’re here! Sit down!”

Many of us began live streaming as a line of federal agents wearing military fatigues and riot gear started marching toward us, and we reminded and encouraged each other to “sit down!” as fear and confusion pushed people to their feet for a better view. Agents headed straight for the doors of the buses. We began to realize they weren’t here to arrest protesters, but to take the two men detained by ICE away. Some protesters started to close in around the bus. As I got closer, I was able to read “US Border Patrol” on the green uniforms of the agents closest to the bus.

Agents began using tear gas and pepper spray in all directions while kicking, punching, and physically removing protestors from their path to the buses. The crowd screamed, “let them go!” as the agents dragged the two men from inside the buses over concrete and rocks and into unmarked vans that sped away. Protesters surrounded the family members to protect them from federal agents. Federal agents, including Border Patrol, ICE, and agents with insignias that read “Customs and Border Protection,” assembled into two lines, marched out of the parking lot and began leaving in unmarked SUVs. Medics rushed to support people who had been tear-gassed. As cars and trucks with Three Percenter stickers prowled the parking lot, everyone convened one last time for speakers including local faith leaders to issue a final rallying cry that we are not giving up, that we are going to continue to fight to end detention and deportation in Oregon, and that we are going to grow the movement so next time there will be even more of us!

Thursday morning, the families reported back that they still hadn’t heard from the two men who were disappeared into unmarked vans. I joined representatives from several local and statewide organizations in a meeting with Deschutes District Attorney Hummel to ask him to open a formal investigation into the incident, and Latino Community Association sat down with the police chief to hold him accountable for destroying the trust of the community in his first week. That afternoon, Mecca Bend, Latino Community Association, Central Oregon Peacekeepers, Causa, Latino Network, local faith leaders, and ROP spoke at a press conference and impromptu rally of about 75 people to call out police-ICE collaboration in violation of state law, to celebrate the way that Central Oregon showed up en masse with such little notice, and to share what’s coming next.

Thursday evening, a judge denied the Temporary Restraining Order because the two men were taken out of the jurisdiction. Today we learned they were taken to Northern Oregon Regional Correctional Facility (NORCOR), a public jail that has Oregon’s last remaining ICE contract, then up to GEO Group’s private Northwest Detention Center in Tacoma, where confirmed cases of COVID-19 are growing by the day. The community is working hard to ensure that these particular families get their loved ones back as soon as possible, while also building strength so that no other families are ripped apart by the violent and inhumane systems of detention and deportation.

This moment calls for people of conscience to take action:

We have a vision of Oregon where everyone can live their lives fully with safety and dignity, and that vision will not be possible until ICE, Border Patrol, and the Department of Homeland Security are no longer tearing our communities apart. Two nights ago, Central Oregon demonstrated our shared values as Oregonians who care deeply about our fiercely interdependent communities and the dignity of every single person who calls our state home. As Oregonians, we believe in showing up for each other. I continue to be inspired by the ways we are joining together to confront the forces that seek to divide, intimidate, and silence the people most impacted by immoral immigration policies and tactics!