Every year at the annual Caucus and Strategy Session, ROP gives out 3 Human Dignity Awards to groups or individuals who are making an impact in their community, and standing up for human dignity values.

If you missed the Caucus, don’t miss this chance to “meet” our 2011 recipients.  Here they are.  Another round of applause in appreciation of their hard work and vision!!  I don’t want to get too sentimental, but Oregon would just not be the same without you.

Thank you all for your enormous contributions to the movement.  Adelante!

P.S. Thanks to Jerry Atkin for being our Caucus photographer

Based in Central Point – this group has organized dozens of forums across the state for homeowners going through foreclosure.Their workshops go far beyond mainstream assistance programs offered by social service agencies.  They actually lift the shame and invisibility that many homeowners feel when they can’t make payments, and they educate the whole community about the root causes of the foreclosure crisis: irresponsible lending, and an economic crisis that bails out banks while leaving working people out in the cold.

Find out what they’re up to at their website here: http://goodgriefamerica.ning.com/ 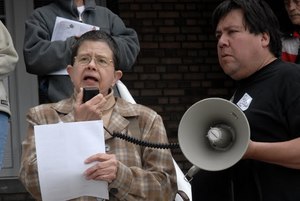 Formed in 2008 in Bend, this group brings together immigrants, Latinos, white allies, and people of faith to address the deportations crisis from a movement-building perspective.  They’ve done amazing work across cultures to expose the impact of deportations, reduce the suffering and isolation caused by families getting broken up, and advocate for policy change on the local and state level.

Their report a Plea for Compassion and Common Sense was based on personal testimonies, freedom of information requests, and is one of the most powerful documents we have of the impacts of deportations on communities in Oregon and the inhumane treatment of immigrants by our law enforcement & immigration system.

Photo of Betsy Lamb (left) and Greg Delgado, 2 of MANY volunteers with Immigrant Family Advocates 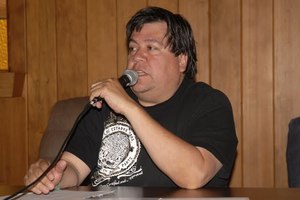 Greg’s roots go back to Arizona, just a few miles from the Mexico border. His family is one of those who “they did not cross the border, the border crossed them” – as the border between Mexico and the United States was redrawn leaving many Spanish-speaking Mestizos living on the US side.  He knows about the current border enforcement war, and brings enormous heart and experience to all of his work.

He came to organizing from a background as a tour guide and gourmet chef, among other professions, when he was hired several years ago by Central Oregon Jobs with Justice to do their Latino outreach.  He now continues his work as coordinator of CAUSA’s Central Oregon office.  He has enormous energy, huge compassion, and is bringing up a new generation of leaders in his wake.  He is a true leader, community-builder, and organizer.  Oregon is fortunate to have him.