At this year’s Rural Ca 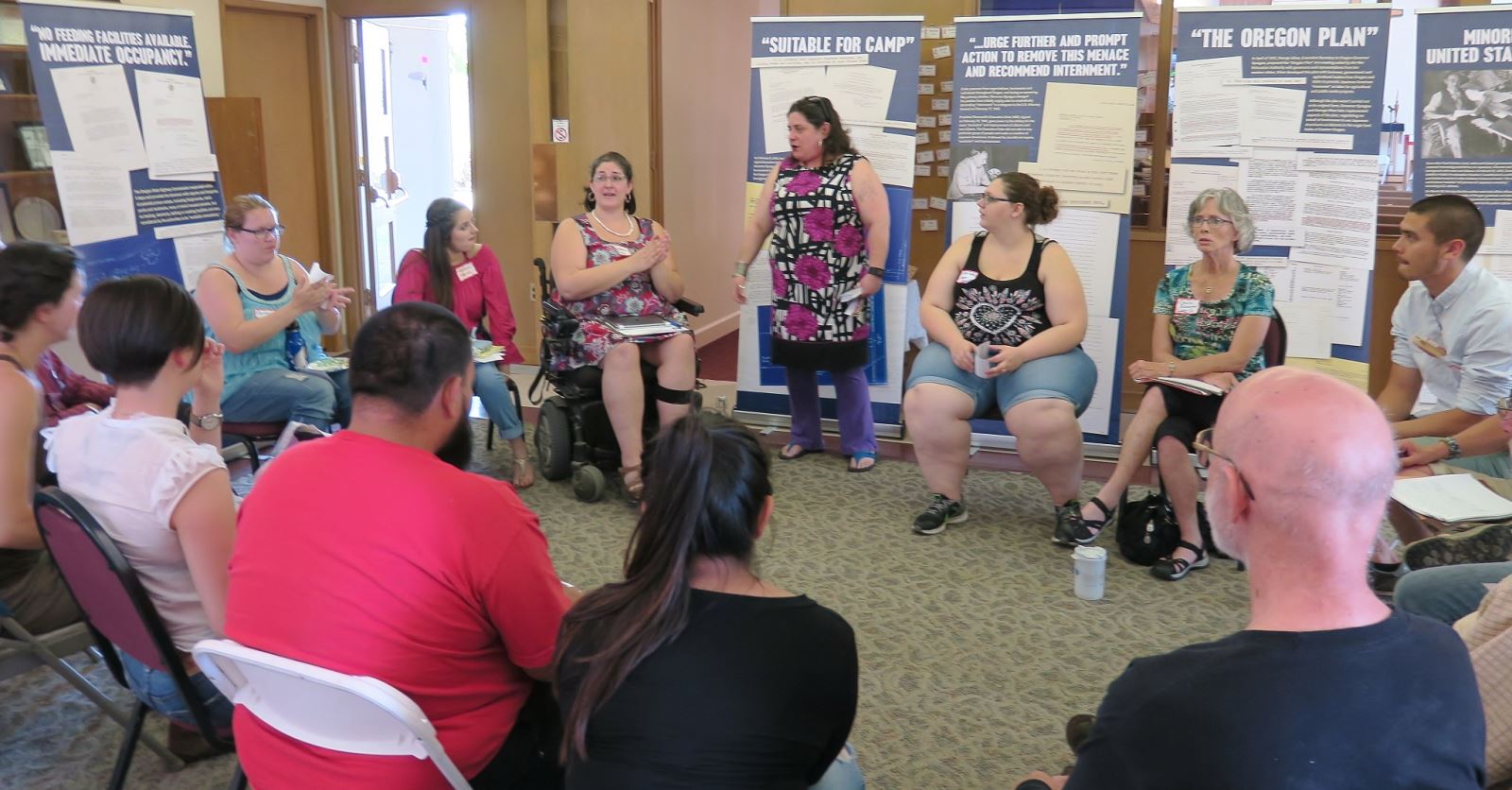 ucus and Strategy Session, folks from across the state were stunned when they learned about their community’s history from Architecture of Internment: The Build-up to Wartime Incarceration, an exhibit created by Graham Street Productions that illustrates the lead-up to Japanese internment during WWII in original letters and headlines from that time. Architecture of Internment exposes little-known details about how businesses, large-scale farmers, and small town community organizations across Oregon built political pressure that made the forced removal and incarceration of Japanese-Americans and Japanese immigrants possible. The letters featured in the exhibit demonstrate the dehumanization of those who were interned, including how the state of Oregon identified roadside clearings on remote highways and animal pens at fairgrounds with no heat or water in Harney, Malheur, Lake, and Baker Counties as potential sites for incarcerating people of Japanese ancestry. In fact, large farm-owners mobilized the Governor to write to federal agencies to demand that the people who were interned be forced to harvest sugar beets in Eastern Oregon.

Groups at the Caucus buzzed with ideas about what it could look like to host Architecture of Internment in their hometowns: What if we hosted an opening night event with a panel of immigrant, refugee, and Muslim speakers who can speak to the connections to the current political moment? What if we brought the exhibit to the local high school and had teachers bring their classrooms through? What if we worked with the local historical society to create a complementary exhibit about the families who were forced from our community and incarcerated? What if we hosted the exhibit at the church down the road who just declared themselves a Sanctuary space and rallied our neighbors to support them? Could we host the exhibit and collect signatures in support of declaring our town a Welcoming Community? If these ideas are getting you excited about hosting Architecture of Internment in your town, email grace@rop.org!

The relevance of this exhibit is not lost on human dignity leaders today. The dehumanization of Japanese immigrants and Japanese-Americans illustrated in Architecture of Internment led Caucus-goers to discuss the parallels to our current political moment. Our immigrant, refugee, and Muslim neighbors are being scapegoated and targeted, from the Muslim ban to expanded detention and deportation of immigrants and asylum-seekers, to sky-rocketing hate crimes and vigilante violence. When Oregon students learn about Japanese internment in school, the takeaway is “this must never happen again.” We are in a moment where activists and organizers are asking our communities, “what are we going to do to stop this now?”

Architecture of internment is a great way to kick-start a community conversation about racial justice and human dignity in your hometown! Here are some ideas to brainstorm with your group to engage the community at large:

Caucus-goers were struck by the immense influence that lobbying by Oregon leaders and organizations had on decisions that were made by the federal government. Campaigning in Oregon and across the country moved President Franklin D. Roosevelt to pass Executive Order 9066 enabling the forced removal and imprisonment of Japanese Americans and immigrants. While Architecture of Internment offers us the opportunity to see the role our communities (both rural and urban) played in internment, it also charges us to understand the leverage that rural communities can have in decisions that impact hundreds of thousands of of people.

When armed, out-of-state militiamen occupied our towns, communities under siege responded by saying, “Who speaks for rural Oregon? We have our own voice — we do!” When activists and lawyers rallied and sat-in at airports across the country in response to the announcement of the Muslim ban, rural Oregonians drove to PDX and showed up in solidarity in snow and rain at their small town airports to demonstrate that they too would put their bodies in the way of deportations and bans — and the ban was halted! Every day, rural organizers and activists across the state are leveraging their power to build sanctuary, fight for funded and functional libraries and crisis centers, demand that local law enforcement be more accountable to and defend our communities, and build beloved community where everybody belongs.

We know what we are capable of when we understand our history, listen to our instincts, reach out to our neighbors, and own the collective power that we have in creating an Oregon where everyone can thrive! We invite you to think of the ways that bringing this lesser known history to your community could move your neighbors and political leaders toward action! Want to bring this exhibit to your community? ROP’s organizers are excited to work with your group to come up with a plan that starts powerful conversations and supports your local organizing for human dignity. Email emma@rop.org if you are interested in hosting!