Over a year ago, when ROP committed to making 13 monthly radio show and podcast episodes to share organizing stories from across rural Oregon, we had no idea all that 2020 would hold…A pandemic! Wildfires! A renewed movement for Black liberation that is winning major victories! What a year! What we did know is that storytelling is one of our long-held traditions. As rural people, we were hungry to hear rural folks talk about our experiences and our organizing in our own words. Thanks for bringing honesty, humor, and heart to season 1 of Rural Roots Rising! We have learned so much with all of you through the process.

For season 2 of Rural Roots Rising, we’ll be highlighting podcasts and radio shows made by rural Oregonians around the state. Do you make your own podcast or have a radio show focused on rural Oregon? We’d love to learn more about your program! Do you have ideas for interviews or dreams of podcasting but are not sure where to start? We can help! Let us know at hannah@rop.org!

Our most recent episode of Rural Roots Rising marks the end of season 1. We look back at our first ever episode, reflect on some of the lessons we’ve learned, and share a bit about where we’re headed. Hindsight 2020: Telling Rural Stories features Monica Pearson with North Coast Progressive Action in Clatsop County, Rita Schenkelberg, a new city councilor-elect in Deschutes County, Brenda Flores with Raíces in Umatilla County, and Kate Orazem, ROP’s new archivist! They share stories of election organizing in their towns and the importance of both celebration and reflection in sustaining and growing our work, especially in the hardest moments.

Find out when your local radio station is playing Hindsight 2020: Telling Rural Stories at ruralrootsrising.org or find the episode on Spotify, Apple Podcasts, Stitcher, or wherever you get your podcasts!

Monica and Brenda were both featured in our first episode Anyone Can Be An Organizer. One year later, we checked back in with them to hear more about what’s changed in their work over the past year:

In Clatsop County, Monica shared about the backlash North Coast Progressive Action is facing in the wake of their ongoing Black Lives Matter organizing. She updated us on how they’re creating safety plans together and why they didn’t let it stop them from organizing to vote down a local ballot measure that would have designated Clatsop County as a Second Amendment Sanctuary. In an effort to creatively reach more people, they even created a series of election Tik Tok videos featuring group members in T-rex and pumpkin costumes. 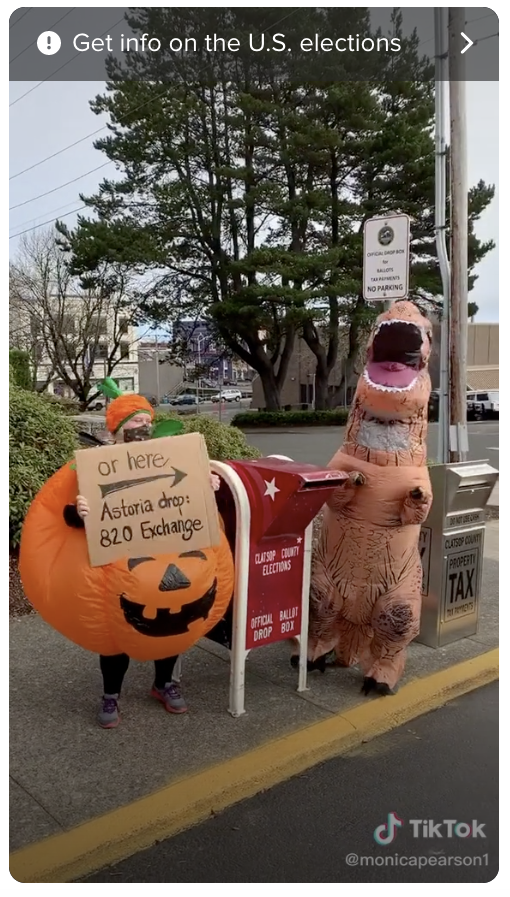 “Here in Clatsop County, we had measure 4-205 which was going to make Clatsop County a gun sanctuary county, so a lot of the work we did was actually for that measure, because we really did not want that to pass in our county, because we already had some increased militia activity… We called local elected officials and the sheriff… [and] we actually partnered with them and they ended up creating a statement of their thoughts on it and why it would not be a good thing if it passed in our county.” -Monica Pearson

In Umatilla County, Brenda and other Latinx organizers formed Raíces back in 2018, a group focused on organizing for immigrant rights and supporting the growth of powerful new community leaders. This year, they have been fundraising and distributing money to people struggling to make ends meet through the recession and they also distributed 500 newsprint STAND Election Guides in English and Spanish at mask distribution events in their area.

“I definitely see a change in the community. With the Trump administration–having him as president and everything. Of course, I did see more people being openly racist, but also the positive is that I’ve seen more people actually speaking out and… I like seeing more people being involved.” -Brenda Flores

Are you interested in getting involved with North Coast Progressive Action, Raíces, or finding or starting a group in your area? Reach out to us at hannah@rop.org!

Brenda isn’t the only one who’s local organizing has gotten more people involved in the work of advancing human dignity and democracy. Over the course of this year alone, hundreds of new organizers have joined the movement, dozens of new groups have formed and that growing people power is leading to real changes on the local level. In Deschutes County, Bend elected 4 new city councilors this month including Rita Schenkelberg, Bend’s first person of color and first openly queer person elected to the city council. Rita has been working directly with organizers across the region, including co-organizing a Black, Indigenous, People of Color-led Rally to the Ballot Box, that we highlighted a few weeks ago. We called Rita up to talk about creating communities where everyone can fully participate:

“Working in mental health most of my adult life, I have this strong duty and appreciation for an individual’s experience. So I’m really excited to bring that to politics and government. I’m just really excited to write equity into policy, and to create systemic change, and to protect and empower and uplift the entire community here in Bend within housing and structures and infrastructure and sewer and basic needs, and all of the pieces that City of Bend is in charge of.”

Rural Roots Rising is just the latest iteration of capturing stories over the decades of ROP’s organizing history. We have boxes of archives documenting organizing in every county of the state, including newspaper articles and protest photos, group meeting and town hall agendas, and oral history interviews—some of them going back more than 30 years! In the last segment of this episode, two members of the ROP staff team, Meredith and Kate, sat down to chat about the future of the rural organizing archives. Kate Orazem is ROP’s new archivist, and she just started digging into the archives as we figure out a way to make them accessible for rural organizers. Do you love pulling stories out of saved scraps from years past? Do you want to know what organizing looked like in your county in the mid-1990s? Reach out to us at office@rop.org! She is really excited to get to know people across the network!

“If you feel connected to organizers in the past, who worked on things you care about, you can see where they made or fought for victories that are really important to you… but you also, with the benefit of hindsight, can see ways they made mistakes. I think that is really valuable in looking at yourself critically, and understanding where our own movements might be falling short, where we should be pushing ourselves to do better, because you have that sense of, well, how are people in the future going to look back at me, the way I’m looking back at these organizers in the past?” -Kate Orazem

Listen to Hindsight 2020: Telling Rural Stories here! And reach out to us at hannah@rop.org to be a part of next season and help us share more rural organizing stories, created by and for rural Oregonians from around the state!

Your support for ROP helps us to stay focused on the work at hand: supporting more than 80 autonomous human dignity groups building community power and organizing for justice, democracy and dignity across Oregon!

Become a monthly sustainer with a secure monthly gift, and help ROP throughout the entire year. Thank you!