Our hard-fought victory of Driver’s Licenses for All is being threatened by the misleadingly named Oregonians for Immigration Reform (OFIR). With our neighbors reeling or numbed by the onslaught of national news about the systematic mistreatment of asylum-seekers and migrants by the US government with our tax dollars, this moment calls on us to raise our voices! Now is the time to take action for human dignity!

Oregon celebrated a tremendous victory when the Oregon Legislature passed and Governor Brown signed House Bill 2015, giving the right to driver’s licenses for all Oregonians regardless of documentation status. Members of human dignity groups around Oregon worked incredibly hard to successfully move their legislators to vote in favor, including collecting signatures on hundreds of postcards, testifying and lobbying in Salem, and organizing and attending community forums. Now OFIR has filed a petition for a ballot measure to take away our victory.

We knew that passing the bill in the legislature and having a supportive governor sign it would likely not be the end of the fight for driver’s licenses, because we’ve seen this before. This moment reminds us of 2013 when our legislature passed a bill that gave undocumented immigrants the right to a driver’s card and OFIR managed to gather enough signatures to put driver’s cards on the ballot in the form of Measure 88. Unfortunately, they successfully overturned the law, taking away access to the driver’s cards in November of 2014. This time though, we are prepared to defend our victory BEFORE they get it on the ballot! We will fight to ensure no one faces barriers to full participation in our communities, especially in rural and small-town Oregon where a vehicle is often a necessary part of life.

How can OFIR overturn something passed through the State Legislature? When the ballot initiative and referendum system was voted into Oregon’s constitution in 1902, it was conceived of as a way to enlarge our democratic process. However, the ballot initiative process has often been hijacked by corporate interests and right-wing organizations who use unlimited resources to overturn hard-won decisions made by our elected officials, limit the taxes paid by the wealthy and corporations, advance regressive policies that hurt women, LGBTQ+ people, communities of color, and immigrants, or to turn out the vote for conservative candidates. It often forces those without corporations at their back to use our precious resources of people power and grassroots donations to fight to hold onto victories we have already won instead of working to move Oregon forward.

What do we do when our communities are under attack? Show up, fight back!

1. Defend Driver’s Licenses for All: Decline to Sign! Talk to your friends and neighbors about declining to sign ALL petitions unless you know exactly what it is. Initiative petitions can be misleadingly written, and signature gatherers are trained to encourage people to sign measures that roll back basic human rights by saying that sending issues to the voters is democratic.

2. Who is profiting from detention and deportation in your county? Check out this article and map of businesses and local governments making money from working with Immigration and Customs Enforcement (ICE). Pick a contractor and make a plan to pressure them not to do business with ICE! Not sure where to begin? Contact emma@rop.org to set up a strategy session with your local ROP organizer and we can help your group form an action plan!

3. Join the call to end ICE arrests at courthouses! Contact Oregon Chief Justice Martha Walters and urge her to issue a rule prohibiting ICE from arresting people in and around courthouses. Use this sample call script and read more about the petition before Chief Justice Walters here.

4. Build your group! Now is the time to find new supporters and bring them into our ongoing work, or to start a group in your community so you can take action together! There is a growing sense of outrage across the country and among our community members in response to concentration camps, detention, and deportation. Carry sign-in sheets to all your events (here is an example!) and add folks to your email list and database! Want to start a group? Email ROP at emma@rop.org and we’ll help you get started!

We worked hard to win driver’s licenses for all and we aren’t stopping now! 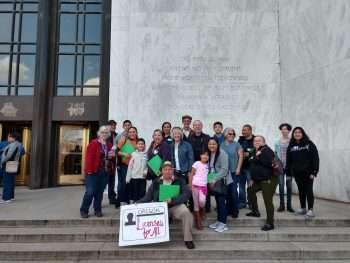