Tomorrow, Unidos Bridging Community, a Yamhill County human dignity group, is hosting the grand opening of BORDERLESS STORIES – an art exhibit that documents the experiences of 10 immigrant families in Oregon through photos and stories. 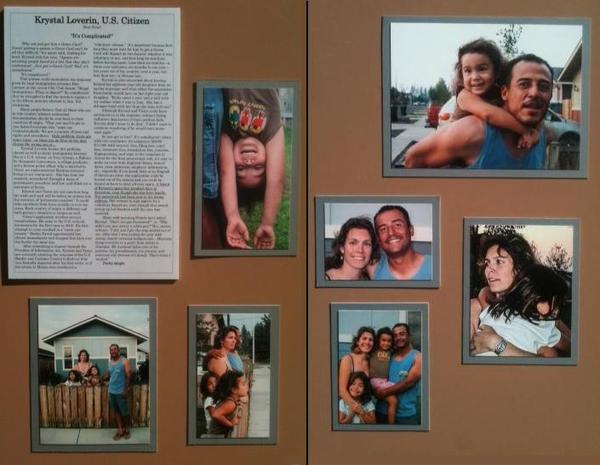 And what a powerful exhibit!!  It shows the humanity and complex realities behind today’s immigration debate. Regardless of how much or little you know about immigration and immigrants in Oregon, it adds powerful new voices to the issue: and those voices of are of the immigrant families that have chosen Oregon as their home.  (Thanks to ROP member group Immigrant Family Advocates in Central Oregon for initiating this project!)

You can download a prinable version of the accompanying “zine” that has complete stories now from Deschutes and Yamhill Counties. (It’s laid out for double-sided printing, booklet style.)

The exhibit opening comes on an important date, as National Welcoming Week begins this Saturday.  Welcoming Week aims to build meaningful connections and a spirit of unity between U.S. and foreign‐born Americans – events are planned in more than 20 states!

If you live in or near McMinnville, we’ll see you tomorrow night.  If you live elsewhere, the exhibit is available to ROP member groups (joining is easy). Contact cara@rop.org to talk about hosting the exhibit in your hometown.

(PS. Don’t miss the full story in the press release below!)

The exhibit was created by the Immigrant Family Advocates (IFA) in Central Oregon, who interviewed and photographed members of 8 immigrant families, documenting why they left their home country, the challenges they have faced, and why they chose Oregon as their new home and community.  Sue Nell Phillips of IFA will attend the event as a guest speaker.

Unidos Bridging Community has done their own interviews of immigrants in Yamhill County and will add two of these stories to the exhibit.

McMinnville resident and Unidos member Jenn Brewer said, “Yamhill County has a large immigrant population that has made huge cultural and economic contributions to our community. The goal of Unidos is to build a deeper understanding of who these people are and to facilitate an environment where we can help each other thrive.”

The exhibit opening at the McMinnville Library is Oregon’s kickoff event for National Welcoming Week (officially September 15th – 22nd). This exhibit also launches a statewide tour throughout a dozen counties, from Lincoln to Columbia to Union.  Many of these groups, like Unidos, also have year-round efforts to build welcoming communities and celebrate the richness that immigrants bring.

Both IFA and Unidos are member groups of the Rural Organizing Project (ROP), a statewide human dignity organization.  Amanda Aguilar Shank, senior organizer at ROP, said, “Local volunteer groups across Oregon and across the country, like Unidos Bridging Community, are coming together to celebrate the richness that immigrants bring to the communities where they make their home.”

There is a larger vision behind the exhibit.  She added, “The vision of ROP is a state where every person matters, no matter how rural, where they come from, or whether they’re different than the majority.  We believe that the diversity of rural and small-town Oregon can be our strength.”