We wrapped up our statewide tour of Beyond Burns: the Growing Patriot Movement last week with two more engaging and energizing stops in Wallowa and Union Counties! As we dug into the research and tools we’ve compiled in Up In Arms: A Guide to Oregon’s Patriot Movement, both communities began connecting the dots between what is happening in their local politics and how they can organize to build community.

Over 25 Wallowa County residents gathered in the basement of a Lostine church. The room was kept small intentionally so folks could really have in-depth conversations. The diversity of political and social viewpoints in the room allowed for passionate and thoughtful discussion. Many folks in attendance talked about the political hostility and ostracization experienced by anyone who is viewed as an “outsider” in their region: newer residents, LGBT folks, homeless youth, folks in need of social services, and so on.

During a group discussion, one person said, “if sh– hits the fan, we’ll be fine because we have clean water and natural resources, and generally we all like each other.” Another longtime resident responded, “yeah, but who’s ‘in’ and who’s ‘out’? If something bad happened in our area, how do we make sure everyone is taken care of?” The group then began discussing how to build community where, in the case of natural disasters or other emergencies, everyone would be taken care of. One attendee shared the work that local social workers are doing to connect the most vulnerable people in their region with existing community infrastructure, and actively developing new, innovative infrastructure.  While the militia and patriot movement uses real insecurities and vulnerabilities to build their movement, but here is an inspiring example of just how Wallowa County leaders are finding alternative ways to address local needs!

Our last and largest t 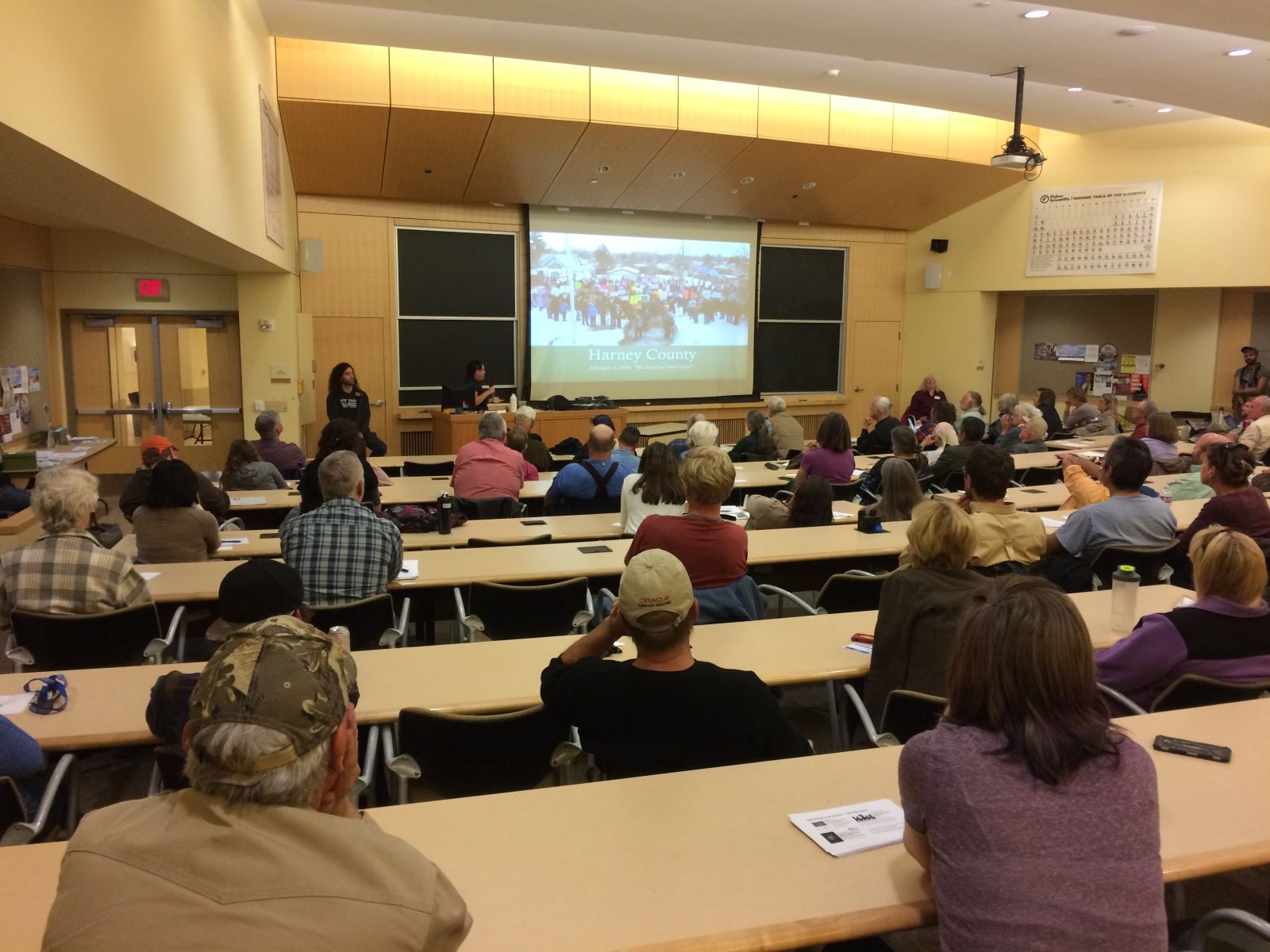 our stop was in La Grande, where we met with over 75 people on the Eastern Oregon University campus. We were thrilled to work with a coalition of campus and community groups on this event, including Oregon Rural Action, Racial Justice Eastern Oregon, United Undocumented Students, and Mission for Environmental and Social Awareness. In small group conversations after the presentation, many people reflected that they were surprised about how widespread the Patriot Movement is across Oregon.

The discussion generated great ideas about how Union County residents can organize around unmet needs in their community to preempt outside interests that might exploit their vulnerabilities. One local community organizer said, “safety and preparedness is not a partisan issue; communities can organize around this.”  Students and staff at EOU talked about language access and resources for Latino students being one of the biggest barriers to having safe and welcoming communities where everyone can thrive.

This tour reached over 550 rural Oregonians through these events, and our incredible security team trained dozens of local leaders in security and de-escalation strategies. Together, we learned a lot about how to create a safe environment so everyone can participate in conversations about what we want our communities to look like. We are deeply appreciative and moved by our friends who traveled with us as security who shared their insights with local leaders across the state so we all feel we have the skills we need to create safe spaces for community conversation.

We know that before this tour many people were already having conversations, in small meetings and around kitchen tables, about the impact of the Patriot Movement in their communities. We close out 10 tour stops knowing that we can have these conversations out in public and in rooms full of people — in libraries, churches and on college campuses. Those who would use threats and intimidation to silence neighbors and force their political agenda do not thrive in environments where there is transparency and collective strength.

Are you interested in hosting a presentation on “Beyond Burns: the growing Patriot Movement in Oregon” in your community? Email grace@rop.org to let us know!

Can’t host an event but still want to learn more and engage? ROP will be offering a webinar and conference call that will share information from the tour and insights from our activist toolkit Up in Arms: A Guide to Oregon’s Patriot Movement.  Pre-register here and we’ll keep you posted on the date and time.

Over the next few weeks and months, let ROP know what’s happening in your community. Are there letters to the editor or other responses to the tour at local host sites? How are the militia and patriot groups organizing around this election? As temperatures continue to rise and election season heats up even more, what are you seeing?  Together, we can help navigate our communities to sane and just solutions and keep temperatures low.

PS: If you haven’t ordered your paper copy of the Up in Arms: A Guide to Oregon’s Patriot Movement, you can do so here.