Today will go down in the history books as a momentous victory for justice and dignity. It took thousands of people and decades to build the political power that has led to the Supreme Court’s ruling in favor of same sex marriage in every state. Today is a day to celebrate courage, dignity, justice and all of those who helped us reach this moment! Today is a day to celebrate, reflect, and recommit to our movement – because we aren’t done yet!
As a tribute to all who have fought for LGBTQ justice, we invite you to look back at all of the work that has been done by human dignity group leaders in rural Oregon over the last decades. 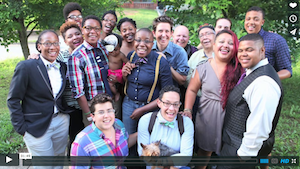 Click here to view the timeline.
You will find short snippets of oral history interviews, photos of the first Rural Caucus & Strategy Session, examples of human dignity group organizing and more. Were you one of the communities that ROP Founder Marcy Westerling visited during the Ballot Measure 9 campaign? Hear Marcy talk about these early years of ROP and human dignity work. Remember the Anne Frank Exhibit that toured the state in 1994? Or screenings of Out in the Silence in 2010?

Our origins: In the early 1990s, rural Oregon was a battleground for the Christian Right “culture wars.” You couldn’t go to the grocery store or post office without passing signs that said “Homosexuality is a sin” and being asked to sign onto Ballot Measure 9.

Many progressive rural Oregonians did not yet know the full extent to which the growth of a reactionary Right was a national phenomenon, but we did know that our communities were under siege.

To cope, progressive small town community members started congregating. Together, with ROP’s Founder Marcy Westerling, we gathered in living rooms and church basements to assess what we were seeing in our communities and what we could do about it. And this led to the organizing of human dignity groups. It was an organic response that many small town progressives arrived at simultaneously – we needed progressive infrastructure in order to push back.

Twenty-three years later we have so much to celebrate. Today’s historic Supreme Court ruling will grant same-sex couples the freedom to marry with equal and legal recognition of their marriages in all states across America. Human dignity groups cover the map of rural Oregon. Many of the same leaders who first stepped up to challenge Ballot Measure 9 in their communities are still working today for dignity and justice for all. And hundreds and thousands more have joined them to grow and expand our movement for human dignity in small town Oregon.

Congratulations to the human dignity leaders that stood up in 1992, to those who have stayed in the fight for over 2 decades, and to those who kept the struggle for LGBTQ justice alive in their communities. And congratulations to all of those who have joined since and helped to expand our collective work, staying on the frontlines until we truly reach liberty and justice for all. To inspire us as we continue our collective work, we share with you this video from our friends at Southerners on New Ground:

Our Rural Organizing Voices timeline of LGBTQ justice work in rural Oregon captures just a small snapshot of the work of human dignity groups and ROP leaders at this time. Send us your thoughts: what do you remember during this time or what does the slideshow bring up for you? Email cara@rop.org and sarah@rop.org with your stories.