On March 14th, Maria from Culver High School joined 24 of her peers walking out. Maria shared, “To me the walkout meant a lot because in Culver speaking about gun control is very controversial, but we wanted to show that it wasn’t just about gun control — it was about the student’s lives lost, not just in this shooting, but in all of them. Although we were limited in what we could do for the walkout, it was important to get the conversation started in Culver and give students an opportunity to speak out about what they believe in. It was the first walkout in Culver High School ever, I think, and we managed to show our cowboy town that they couldn’t keep us silent, even though they tried.” Maria’s experience is just one brilliant young rural leader’s story. Hundreds of young people across rural Oregon walked out, sat in, held vigil, and demonstrated to start conversations at their schools and in their communities about what real collective safety means, and ideas about how we can start to get there.

Last week, in the wake of the school shooting that took 17 students’ lives in Parkland, thousands of students across rural and small town Oregon took bold action despite attempts to silence their voices and their demands for real solutions. While some students were supported by their teachers, administrators, families, and communities, many courageously participated in vigils and walkouts at the risk of suspension, expulsion, arrest, and ostracization. When administrators in Myrtle Creek and counter-protesters in Dallas attempted to interrupt and prevent these acts of civil disobedience, young organizers persisted, setting an example we all should aspire to! Read on for stories of bold student organizing, and check out the roundup of student actions from across the state below! Are we missing your community? Email your story and photos to jess@rop.org and we’ll update it!

At South Umpqua High School in Myrtle Creek, Douglas County, 12 students walked out to their school’s flagpole to observe 17 minutes of silence. The principal approached the students and interrupted the moment of silence with demands that students sign in. The students circulated the sign-in sheet in silence, signing the names of the students killed in Parkland, Florida. They were given a week of detention and faced yelling and cursing from other students, which went undisciplined. The only supportive adult they encountered in their protest was the vending machine maintenance guy, who told them good job on his way into the school to do his job. 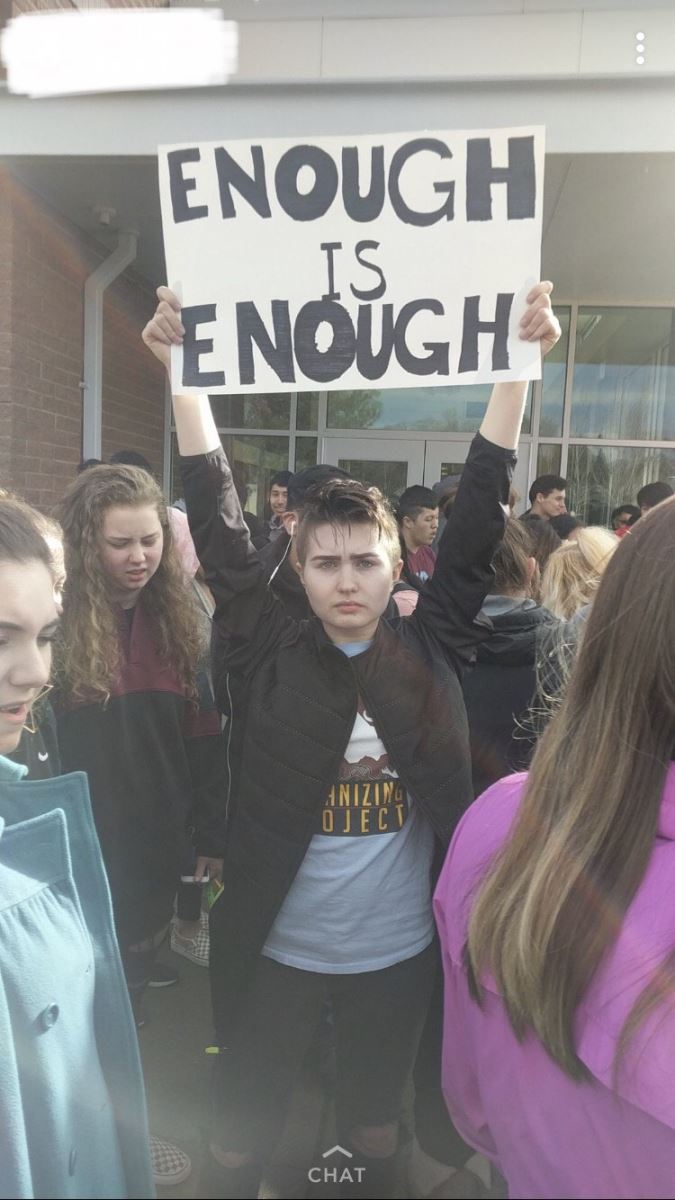 Sierra, pictured here, from Madras High School shared, “The walkout at Madras High School on Wednesday, March 14 wasn’t expected to be taken seriously by most of the students. We thought there would be a select few of us walking out of class and everyone else would either be unsupportive or too scared to stand up for what they really believe. There were about 30-40 students who walked out of class on Wednesday. Students read off the names of the Parkland victims and led several chants.”

Sierra continued, “The Monday before the walkout, there was a police officer stationed outside my little brother’s school. That same day, we learned that when the fire alarm goes off, we’re not allowed to leave our seats until an administrator gives us the okay, in case a shooter pulled the alarm. We’re sick of being scared. At any point in the day, there could be a fire behind us or a shooter in front of us and we’re not allowed to run from either. We just want to be safe.”

The successes of March 14th, not only in Oregon, but across the nation have built momentum for this Saturday’s March for Our Lives events held across the state from Burns to Coos Bay, Pendleton to Roseburg! Students are continuing to organize up to April 20th, the 20th anniversary of the Columbine shooting. Upon the announcement of these walkouts, youth organizers were faced with skepticism, ridicule, and outright aggression. These brilliant and courageous students did not let the claims that they are too young to understand what they are doing stop them. They have spoken with clarity about the conditions they face daily, demonstrated their commitment to each other, and to the students of the future through their unwavering conviction and actions. Let’s all take a lesson from their playbook!

Meet some of these powerful young organizers at this year’s Rural Caucus & Strategy Session on May 19th in The Dalles! Student and youth organizers from across the state will come together to strategize with each other and with rural organizers, activists, and community leaders across generations. Check out the roundup of actions from across the state below! Are we missing your community? Please email jess@rop.org with the story and photos, and we’ll update the list!

1,500 walked out across the Corvallis School District 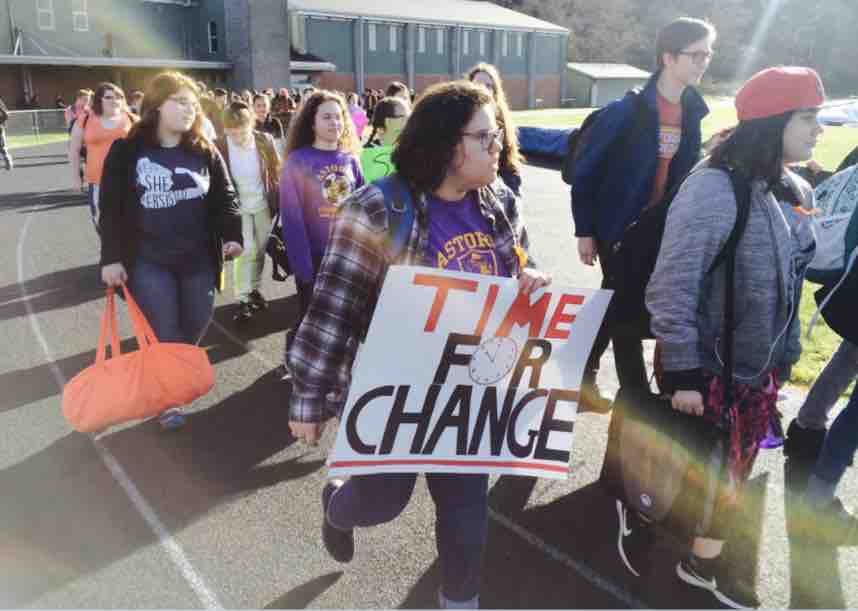 Hundreds walked out in schools across the Bend-La Pine School District, including Bend, Summit, and Mountain View High Schools, Pilot Butte and Cascade Middle Schools. Students at Highland Magnet at Kenwood School in Bend walked to Drake Park and dropped white roses off the bridge over the Deschutes River to memorialize the 17 Parkland victims.

12 students walked out at South Umpqua High, and when the principal interrupted the 17 minutes of silence to have them sign in, they signed the names of the Florida victims. They were given a weeks detention for the act and on the way back into the school other teens yelled and cussed at them and their verbal abuse went undisciplined.

Dozens of Roseburg High School students left their classrooms at 10 a.m. and stood in an outdoor courtyard for 17 minutes, a tribute to the 17 students who were killed in a school shooting one month ago in Parkland, Florida. Six students walked out to Harvard Avenue in front of the school. There they stood in a circle, held hands, bowed their heads, closed their eyes and stood quietly for several minutes. 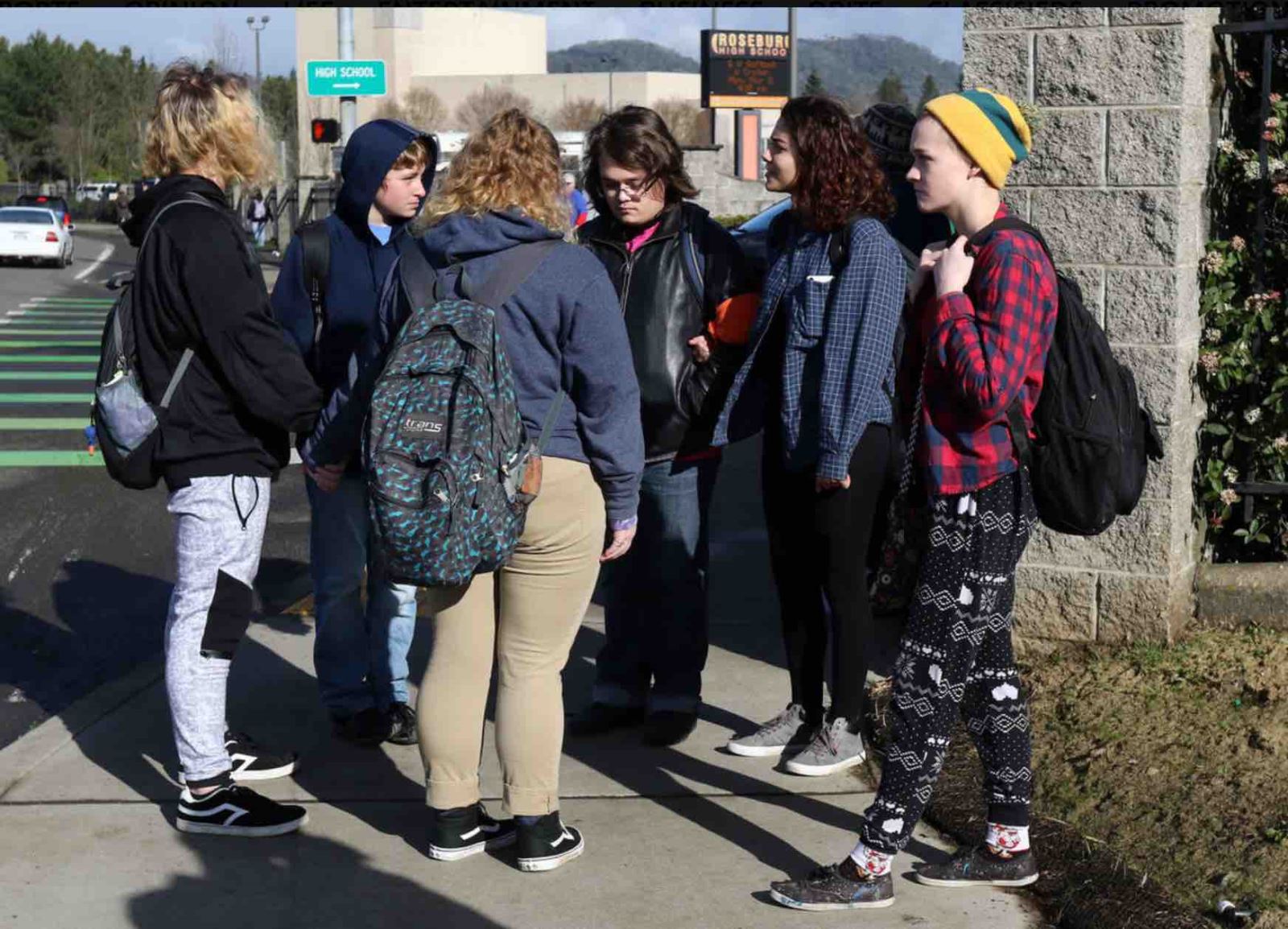 Hundreds of students at multiple high schools across Jackson County. Students and workers at Southern Oregon University and the Oregon Shakespeare Festival walked out in solidarity 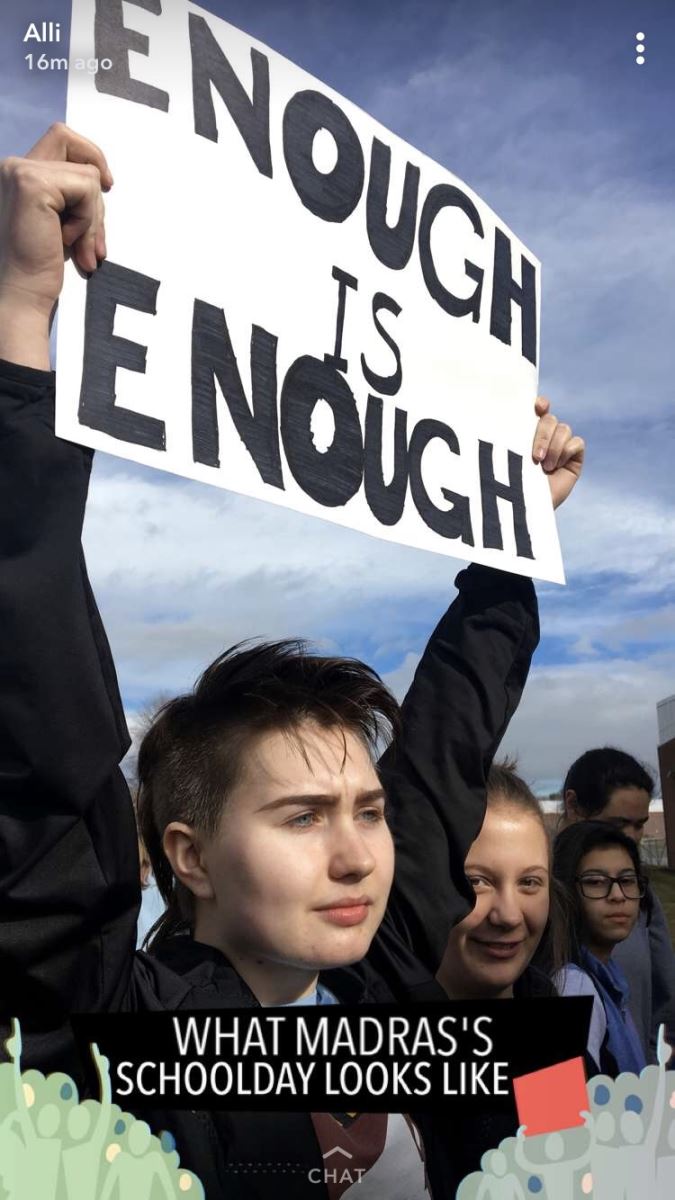 Over 350 students walked out at Grants Pass High School

In Klamath County, assemblies were held at two different high schools, and over 50 students and Ponderosa Middle School in Klamath Falls walked out. Middle school students risked tardy slips and lunchtime detention for walking out.

Students in Lakeview with their Superintendent: 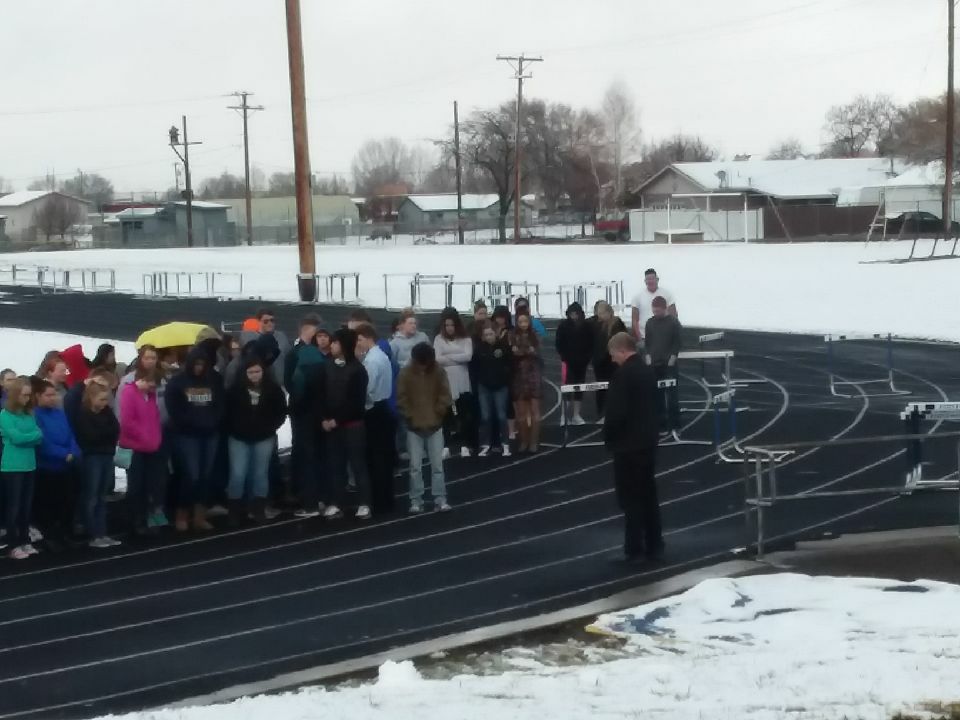 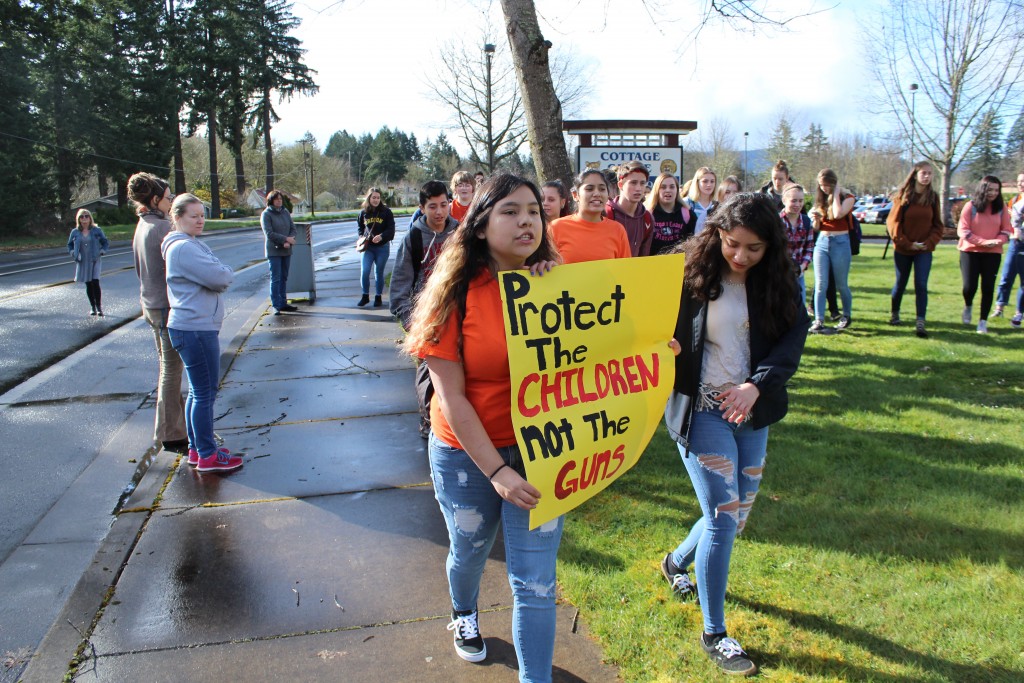 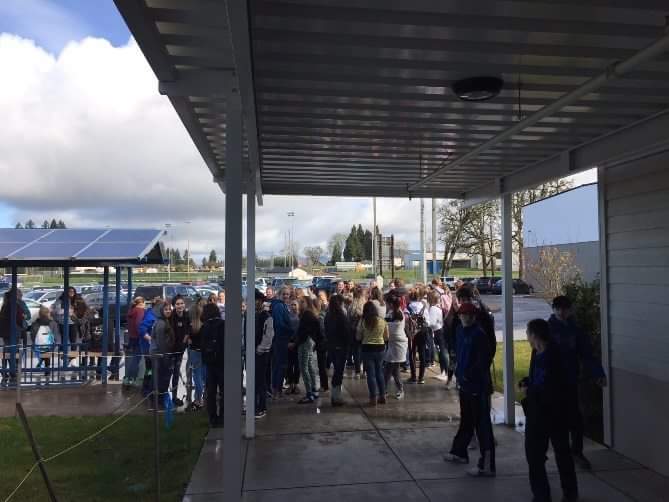 Vale, Ontario, and Nyssa High School students gathered in their respective gyms to observe 17 seconds of silence and hold assemblies.

Students at The Dalles High School and Columbia Gorge Community College walked out. 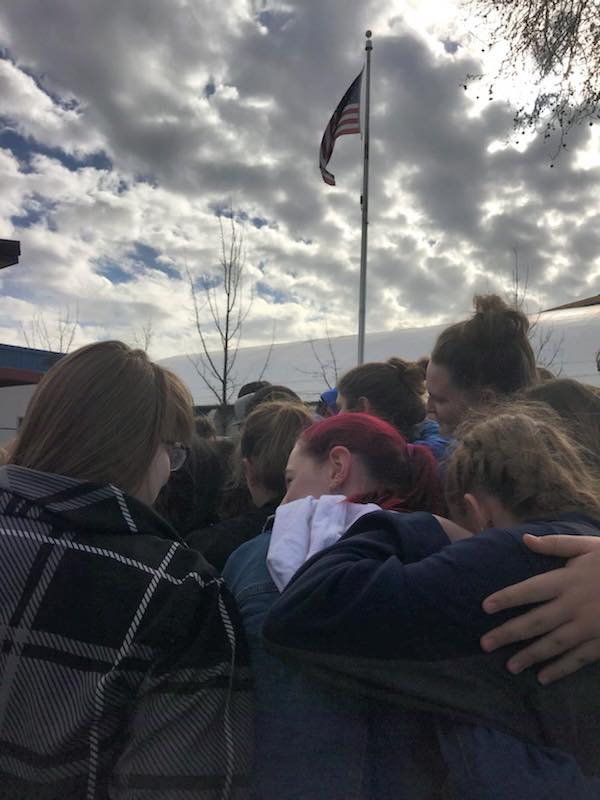 A couple hundred students at McMinnville High School and Willamina High School walked out despite threats of detention if they didn’t have parental approval.

Are we missing your community? Please email jess@rop.org with the story and photos, and we’ll update the list!