As crisis becomes a daily reality for so many, rural organizers and activists have been reaching out to their neighbors and searching for ways to keep each other safe. As we learn how to have the backs of those who are most impacted in this moment, let us listen to and draw from the stories of resilience in our small towns and rural communities. Below is the story of how one community responded and raised their voices in the face of threats, violence, and discrimination:

In July, ROP received a number of calls and emails about a transgender woman being threatened at knifepoint in rural Coos County. Kari, who lives in Bandon, was threatened by one of her neighbors while trying to use the bathroom at her trailer park late at night. The local police took over 45 minutes to respond to her calls, and when they came they told her that they wouldn’t press charges against her attacker. Fearing for her life, she reached out to friends and strangers through social media and asked for support finding safety and bringing public attention to what had happened to her.

After talking with Kari directly, ROP reached out to local organizers, activists, faith leaders, health and crisis workers, and LGBTQIA+ community members to map out existing resources, services, and organizations that could directly support Kari in Coos County. We collectively came up with an impressive list, but also noted critical gaps. We quickly started brainstorming how Coos County residents could come together to fill those gaps and respond as a larger community when one of our neighbors is threatened or attacked.

First, Kari’s experience was not unique. Like so many communities across Oregon, Coos County has seen a rise in violence and harassment targeting immigrants and people perceived to be immigrants, low-income and unhoused community members, people of color, and LGBTQIA+ people. Some of these incidents have been reported on by the local paper, including the post-election bullying of Latinx youth in the North Bend School District, but there are other stories of harassment, discrimination and bias crimes that have happened with little reporting or community conversation. Those most impacted and their closest friends and allies, including faith leaders, activists, and crisis workers, have been carrying these stories with them, working hard to survive and show up for their neighbors in a time of increasing crises and decreasing resources for rural communities.

The second thing that became clear was that people were hungry to take action! From Reedsport to Bandon, folks got together with Kari to share ideas and make a plan to elevate the conversation. The working group recognized a need to connect with one another and take action, engaging the broader community beyond existing organizations and services. A team formed to plan a forum that would bring Kari’s and others’ stories of hate and harassment out of the shadows and develop a network of people who can respond when their neighbors are under attack. 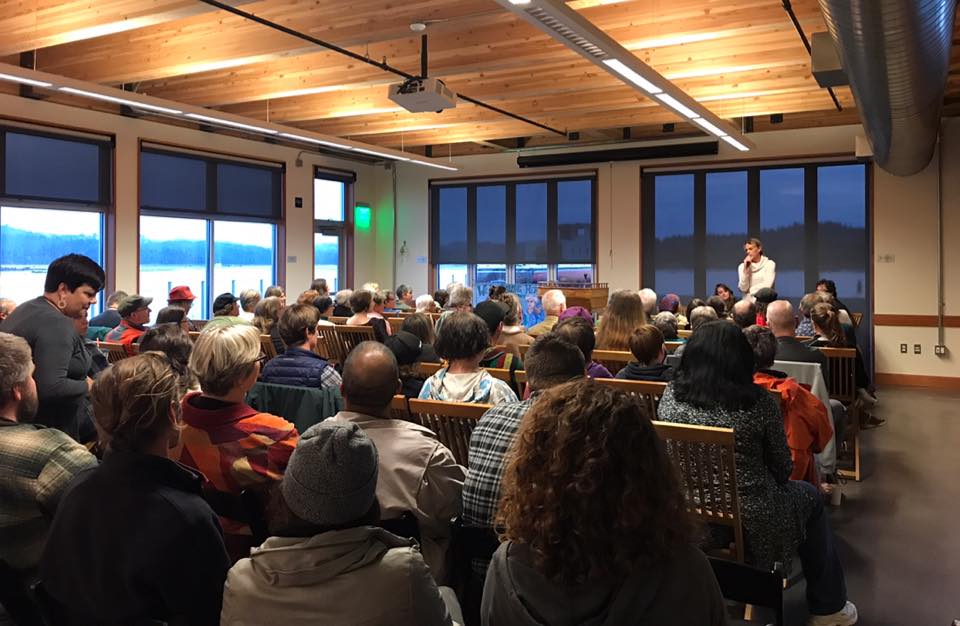 The local team of activists, organizers and faith leaders canvassed businesses and called on friends, family, and parishioners to show up for the forum. On September 21st, over 80 community members from the Coos Bay area crowded into the Coos History Museum! The event opened with Liv, President of the North Bend High School Gay Straight Alliance, and Kari sharing personal stories about the ways that homophobia and transphobia had threatened their safety and ability to thrive in Coos County, and offering direction about how the community can show up for those under attack.

Kari shared the story of being threatened at her home, and also about the continued struggles she has faced since coming out as a transgender woman, including repeatedly losing jobs because of workplace harassment from employers and coworkers, most recently from a job at Bandon Pacific Seafood. In conversation about her decision to share her story as a starting point for community action, Kari said, “There was no sense in me not standing up and telling my story, in saying: enough is enough. I want people to know what happened, because I can guarantee that there are a lot of other people out there who have experienced the same thing. I don’t care if people like me, I just want people to realize that they’re not alone. I thought I was alone for so long.”

Liv told the room how, during her sophomore year, another teen shouted homophobic slurs at her and then hit her with a skateboard, breaking her wrist. At the forum she talked about the ways that her school district and campus security had failed to respond to the incident in a just and effective way. When she reported the incident, the school’s assigned police officer minimized her injuries and said that homosexuality violated his religious beliefs. She still goes to school every day with the student who attacked her and the on-campus police officer who failed to respond. In the face of bullying, Liv has persevered and remains an outspoken advocate for her LGBTQIA+ classmates within her school and in the community. 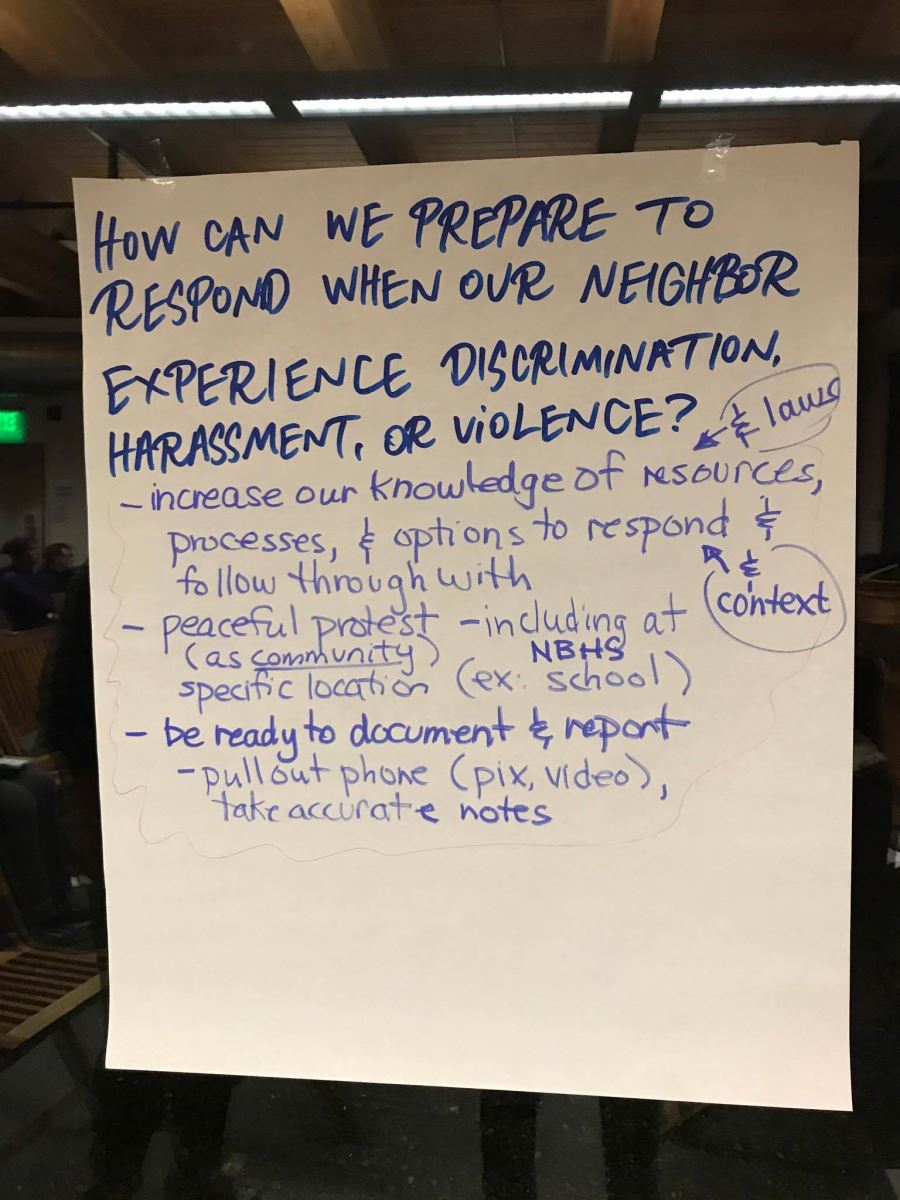 Liv and Kari also talked about their deep love of the land and their towns, and what it would take for them to thrive here. “This is such an incredible, beautiful place,” said Kari. “But people also need to see that there is darkness here. We need to shine a light on that.”

Israel Jurich, Pastor of North Bend’s Faith Lutheran Church, facilitated the panel with Kari and Liv. In hearing their stories, he reflected on the impact that harassment and bias crimes have on the community at large. Violence and discrimination marginalize people who have so much to offer to our small towns, making it difficult for them to stay and thrive. “We risk losing incredible people of great value to our community; people who are amazing community leaders, colleagues, friends, and employees… our best students and our best crab and shrimp pickers!”

The second half of the forum focused on a community discussion. The audience broke into small groups to share stories of harassment and discrimination that they had experienced or witnessed, and brainstorm ways that they could intervene as a community. Some of the ideas that the forum generated included:

The forum also engaged people in a local welcoming poster campaign — “We all belong here” — which was created to encourage local businesses and organizations to be overt and proactive in building a welcoming community by placing posters in their store windows as ambassadors to this crucial conversation.

The community forum closed with a commitment to continue organizing, because, as attendees stated at the event, who else do we have but each other? When the police don’t respond, or make things less safe for our most impacted neighbors, we have to turn to each other to build the kind of community that we all want to live in; one where everyone can thrive and be who they are without fearing for their lives at work, at school, and in their own homes and neighborhood. One where difference is seen as strength, and people are valued for bringing their whole selves to their work and community.

Since the forum, local organizers have formed the We All Belong Here Coalition, a human dignity group committed to responding when their neighbors are threatened by violence and discrimination. The forum sparked media coverage and pressured local law enforcement to sit down with community leaders and hear the ways that their departments are failing people. As leaders in Coos Bay demonstrate, our safety and resilience lies in our commitment to each other, to bringing these stories out into the open and then, together, building strategies to respond!

The initial lack of response from local law enforcement in Coos Bay brings to light the failure of traditional public safety infrastructure in ensuring that no one in our community slips through the cracks. Just this week we are reminded that rural communities continue to be hit hard by ongoing loss of infrastructure at all levels, nixing healthcare subsidies that help cover out of pocket costs for low-income people like the latest executive orderple under the Affordable Care Act. In these times, as we see vigilante and state violence increase, our collective organizing for safety and resilience is all the more crucial. Have a story of local organizing to tell? Share it with us by emailing grace@rop.org and we will continue to share out stories of transformative small town organizing for safety and dignity.