Between the daily headlines about the Trump agenda, and the incredible mobilizations of resistance that are forming in response, we are in an astounding political moment. Folks across Oregon are savoring marching, rallying, and trying to figure out “Where’s Walden?”, and many are hungry for ways to publicly resist that are fun and reach beyond the choir. Young folks led the way last week in Jackson County, sending a strong and inspiring message to morning commuters. On Tuesday, February 21st, a newly formed volunteer group called “Rogue Valley Resistance” pulled off a coordinated banner drop on five different overpasses in Jackson County. The action made the front page of the local newspapers and also delivered a clear message to hundreds of I-5 commuters in the Medford area: Resist!

Rogue Valley Resistance (RVR) got together last month to respond to the local and national impacts of Trump’s inauguration. Most of their members are from the Medford area, though several folks traveled all the way from Northern Josephine County for last week’s action. Many of their members are already involved with other groups in the Rogue Valley, focusing on connecting the dots between immigrant rights, LGBTQ rights, and climate justice. 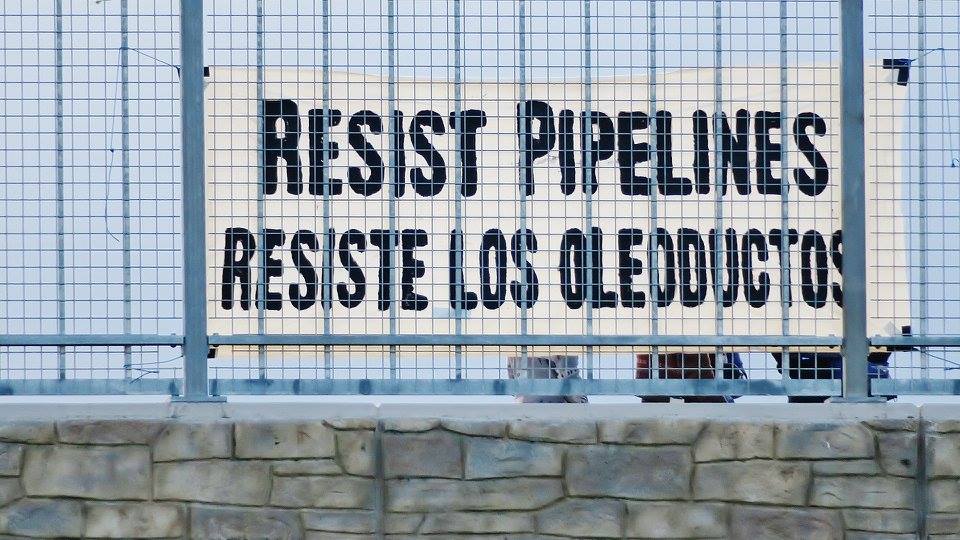 Many RVR members are younger folks, including a couple of Jackson County high school students. After seeing bold and impactful actions happening in cities around the country (such as the “Resist” banner that climbers with Greenpeace hung off of a crane behind the White House), organizers in Jackson County wanted to find new and fun ways to take action in their own neighborhoods. Jackson County is witnessing a rise in hate crimes and vandalism since Trump’s inauguration, including multiple recent incidences of racist, islamophobic, and anti-semitic fliers and vandalism in the Medford and Ashland areas. Jackson County is also home to a large and growing immigrant population, the only Mosque in southwestern Oregon, and also a proposed fracked gas pipeline that is moving forward under the Trump administration.

“We asked: what can we do to fight back against what is happening in our area and also respond to what is happening nationally?” says Syd of Jackson County, who helped dream up the idea for the action with a group of friends. They wanted to do something that would catch people’s attention, make a statement about what their communities are experiencing, and connect the many struggles for justice and human dignity in the area. They were inspired by actions that have been happening around the country, and had heard about past actions in southwestern Oregon where activists used banners on freeway overpasses to protest the wars in Iraq and Afghanistan.

Once they had a proposal, they held meetings with other friends and neighbors to create the banner messages and find people to fill all of the necessary roles. Syd says, “We had a tactic that was really accessible and easy for people to plug in even if they had never done something like this before. More and more people kept showing up and saying, ‘hey, I want to help too!’ People brought in their roommates and friends to help pull it off.”

In addition to thinking through the content of the banners, the group also decided to paint the messages in two languages. Syd says, “There are a lot of folks who speak Spanish in the Rogue Valley, and one of the banners says ‘Resist Deportations’. The largest community that is being targeted by deportations in our area are Spanish-speaking and Latinx. We didn’t just want to tell the people we disagree with that we are resisting them — we want to tell people who are impacted by these things that we will resist with them.”

Jayden, a high school student in Medford, helped plan and carry out the banner drops and also volunteered as one of the group’s media spokespeople. It was one of the first actions she’s ever participated in, though she is an artist and has volunteered to make campaign artwork for area non-profits. Jayden’s advice to other organizers who want to plan similar actions is: “Get a group of friends together. No matter how big or small your group is, know what your ideal outcome would be and also plan for the worst case scenario. Find out what other groups are doing and reach out to people who are already doing things.”

In planning for the “worst case scenario”, RVR made a safety plan that included action agreements for all of the participants, a communication plan, liaisons to interface with any law enforcement or counter protesters who showed up, and people trained in deescalation in case they encountered tense situations (including folks who have attended deescalation trainings with ROP!). Some of the banner teams chose to have drivers nearby in case anything felt unsafe 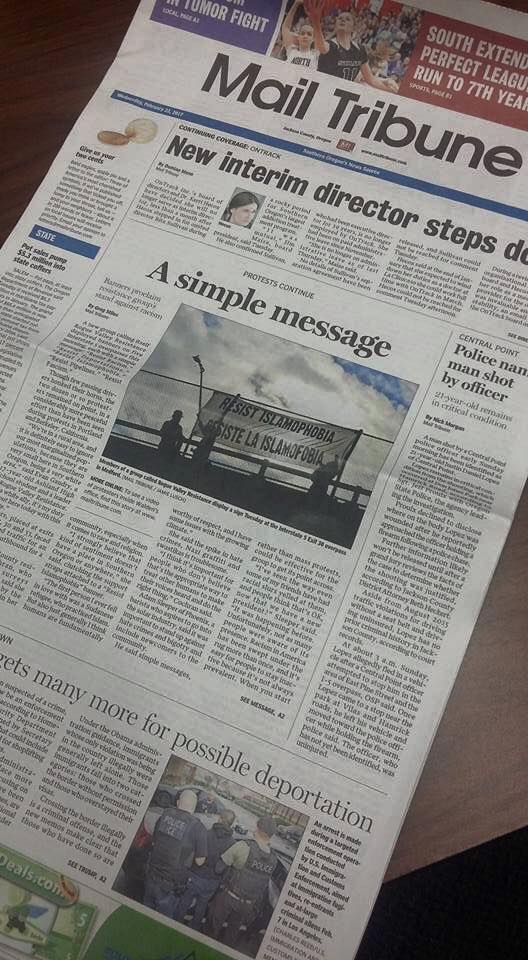 and they wanted to leave quickly. In the end, they were able to deploy all of the banners and stand with them for the entire morning commute time without any disruption. Having a “just in case” plan made it safer for a lot of folks to participate, especially considering that the whole group was spread out over many miles on I-5.

While the group has yet to decide their next steps, Jayden says that she hopes they continue meeting and planning more actions. “We didn’t think this one action would become a new group, but personally I want this to keep going. We are going to have another meeting soon, and hopefully make plans for another action.” Syd says that since hanging the banners, many people have contacted them wanting to join the new group.

We take inspiration from this action not just because of its great impact — hitting the headlines with a strong message of resistance and speaking to hundreds of community members on their morning commute — but also because of the brilliant way that organizers created a unifying message, and how they created safety and inclusion for folks of all levels of experience to get involved. Their action demonstrated unequivocal support for our most vulnerable neighbors, and did so with the courage, thoughtfulness, and creativity that this moment calls for.

Since Trump’s inauguration, there have been several reports confirmed statewide of ICE (Immigration and Customs Enforcement, the federal agency that carries out deportations) detaining and deporting folks, both with and without the cooperation of local law enforcement agencies. This week ICE stopped two vans of farm workers on their way to harvest flowers near Woodburn, Oregon, and detained 11 people. Most of the workers detained are long term Oregon residents with no prior convictions, and all of them are facing deportation.

Every day our communities are witnessing the real consequences of Trump’s agenda, and rural Oregonians across the state are organizing to build solidarity with those who are on the frontlines of both federal policies and the rise of the vigilante violence. Communities are organizing “know your rights” trainings, canvassing local businesses, networking churches and schools to build safety nets for the most vulnerable among us, and forming phone trees and email lists so that they can respond rapidly to threats to their neighbors. At ROP, we want to hear from you about what you’re seeing, hearing and working on in your own community, and what you need to keep resisting.

Drop us an email and let us know:

We will be diving deep into strategies and tactics for resisting deportations, the criminalization of our neighbors, vigilante violence and increasing state violence at our Rural Caucus & Strategy Session! Click here for more information and join us in person June 3rd in Madras and meet some of the Rogue Valley Resisters in person!