Last month, the water protectors at Standing Rock celebrated an unprecedented victory when the US Army denied the permit for the Dakota Access Pipeline to cross the Missouri River. This partial but critical victory, along with a brutal blizzard marking the beginning of a particularly harsh North Dakota winter, changed the dynamics and priorities for water protectors on the ground. Standing Rock Sioux Tribal Chairman Dave Archambault II, as well as many indigenous leaders and organizations at Oceti Sakowin, asked water protectors who were not prepared to stay for the winter to head home.

The fight for clean water at Standing Rock is far from over. Most of the Dakota Access Pipeline (DAPL) is already built, and the US Army’s denial of this permit only delayed drilling on one river crossing. Notably, the decision to deny the drilling permit was actually made by the US Army — the Army of Corps of Engineers recommended the approval of the river crossing. The Trump Administration could reverse this decision, making the situation at Standing Rock all the more tenuous. Alarmingly, the US Senate just named Sen. Hoeven, former North Dakota governor and outspoken supporter of DAPL and the Keystone XL pipelines, the chairman of the US Senate Committee on Indian Affairs.

This decision came down a couple of days before a contingent of over 50 rural Oregonians was scheduled to depart for Standing Rock. We engaged bus riders in a decision-making conversation, and reached consensus around sending a smaller crew of rural Oregonians with supplies once the weather improved (now scheduled to leave tomorrow — weather permitting!).

In preparation for the arrival of this contingent, ROP had a small “advance team” of six rural Oregonians, including builders, human dignity group leaders, and ROP staff, already on the ground in Standing Rock with all of the supplies needed to set up shelters for over 50 people. After we shifted our plans to send a smaller contingent, the six of us in Standing Rock immediately put these much needed supplies and our resources to use at Sacred Stone Camp.

Sacred Stone Camp is the original resistance camp in the movement to stop the Dakota Access Pipeline, established in April on land owned by LaDonna Brave Bull Allard, Standing Rock Sioux tribal member and Lakota historian. There are many people committed to living at Sacred Stone through the harsh winter who gathered there as early as April, including elders and families with small children. LaDonna has asked that people remain at Sacred Stone to see the fight through.

The ROP advance team arrived right after a blizzard had swept through the area, with the temperatures continuing to drop. In below-zero temperatures, cold is not just a passive discomfort, but a force to reckon with. Even as we kept moving and working throughout the day, we had to take shelter and stand around woodstoves every hour or so to warm the tips of our fingers and toes before heading back into the cold.

Fortunately, we had a wonderful team of rural Oregonians equipped with skills in construction, winter truck driving, community organizing, and cold weather camping. We set up three sturdy winter tents after building solid wood floors, insulation and wood stoves to support a kitchen, dining area, and emergency sleeping area. We helped clean up camp by hauling garbage and recycling, and moved and repaired vehicles that were stalled out by the weather (the extreme cold kills car batteries and gets people stuck in ditches!). Despite the cold, we felt warmed and welcomed by the incredible people we met at camp.

Amidst the harshest of winter conditions, we heard from many campers who were steadfast in their commitment to stay until the fight is over — “until there is oil running through that pipeline” or “until the black snake is dead”, with great hope for the latter. Many people on the ground do not trust that the Army decision will be upheld, and have heard that construction is still underway on other segments of the pipeline route. We were amazed by the resilience of the people who continue to keep watch over the water as others look away. For many people at Standing Rock, looking away is not an option. The survival of their culture and community depend on this fight. They are fighting for their home.

We learned so much about the resilience of the community at camp, with people meeting each other’s daily needs in a rural and under-resourced area, assisting each other in daily survival in conditions that are shutting down major roads and interstates. When there are blizzards or extreme cold snaps, volunteers walk the camps to make sure that people have what they need to survive the night. Cooks prepare warm meals, thawing food that has frozen in transport, creatively navigating the challenges of food preparation in cold and crowded tents with camp stoves. Medics tend to people who are suffering from injury, illness, and trauma — a service that has been critical in light of police road blockades and poor road conditions that have blocked or delayed access between emergency responders and the reservation. For those of us who live in rural counties and unincorporated communities, we understand that things like emergency response, mental health services, or basic road maintenance are not a given. Among so many lessons, Standing Rock teaches us what it looks like to reach out to each other to creatively solve problems in the spirit of mutual aid.

Hundreds of rural Oregonians across the state gathered supplies, fundraised, and organized in their home towns to raise awareness of the inspiring work of water protectors at Standing Rock. Another team of rural Oregonians is gearing up to head back to Sacred Stone tomorrow, January 9th. The supply run will take remaining supplies that we gathered in November, updated with specific requests from our contacts at camp, including propane tanks, a huge walled tent, stoves, and sleeping bags. While at camp, they will set up the gear they’re bringing, participate in work crews, and make supply runs. Shifting from one big bus trip to two smaller supply runs has allowed volunteers to remain more flexible with timing (our winter weather sure hasn’t been cooperative!) and to show up in solidarity in ways that are requested by and accountable to indigenous leadership. We could still use your support! All of the funds that we collectively raise will be used to purchase additional top priority supplies for the water protectors at Standing Rock, such as firewood and propane.

After we decided not to take an entire bus to Standing Rock, many of the folks who had planned to be on that bus gathered in Cottage Grove to discuss the ways that rural Oregon could continue to stand with Standing Rock. An amazing crew of riders from Klamath, Jackson, and Josephine Counties decided to organize a rally in Grants Pass to urge people to withdraw their money out of Wells Fargo, a major funder of DAPL. 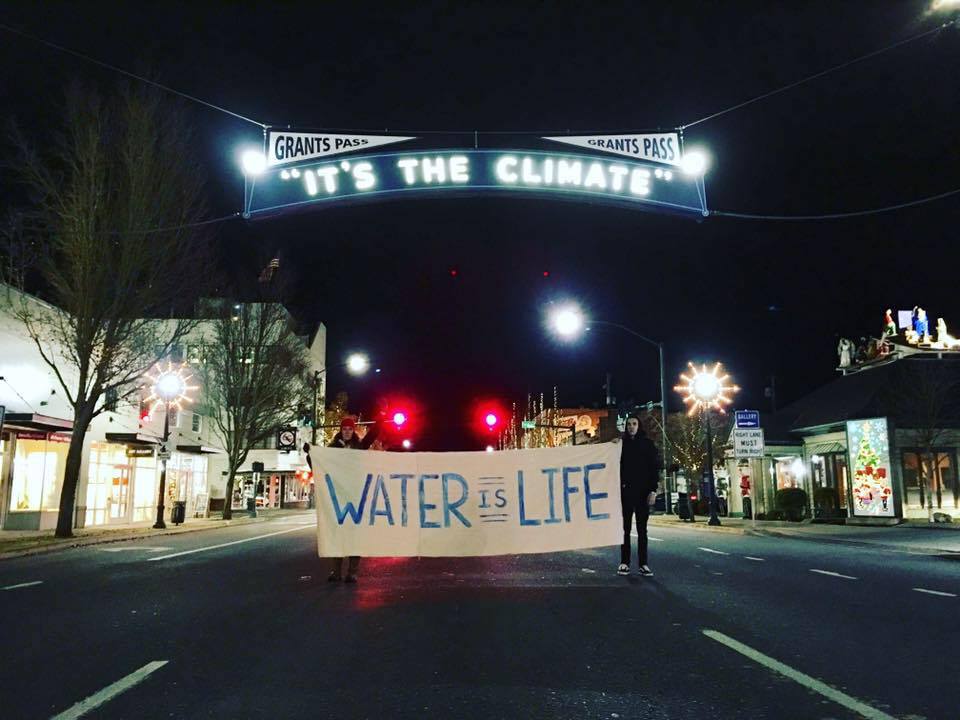 On December 15th, dozens of people gathered outside of the Grants Pass Wells Fargo with banners and a megaphone, engaging customers in conversations about the connections between the bank and DAPL, and the impact on the Standing Rock Tribe! This action in Grants Pass was one of hundreds of events planned in December as part of a global month of solidarity for Standing Rock.

Now is critical chance for water protectors to defeat DAPL! On January 1st, the contract for the pipeline expired, which means investors and oil buyers are now able to end their relationship with DAPL. Continued visible pressure on investors like Wells Fargo and US Bank could further weaken DAPL during a time when water protectors have already succeeded in an Leaflet from the rally in Grants Passunprecedented victory. 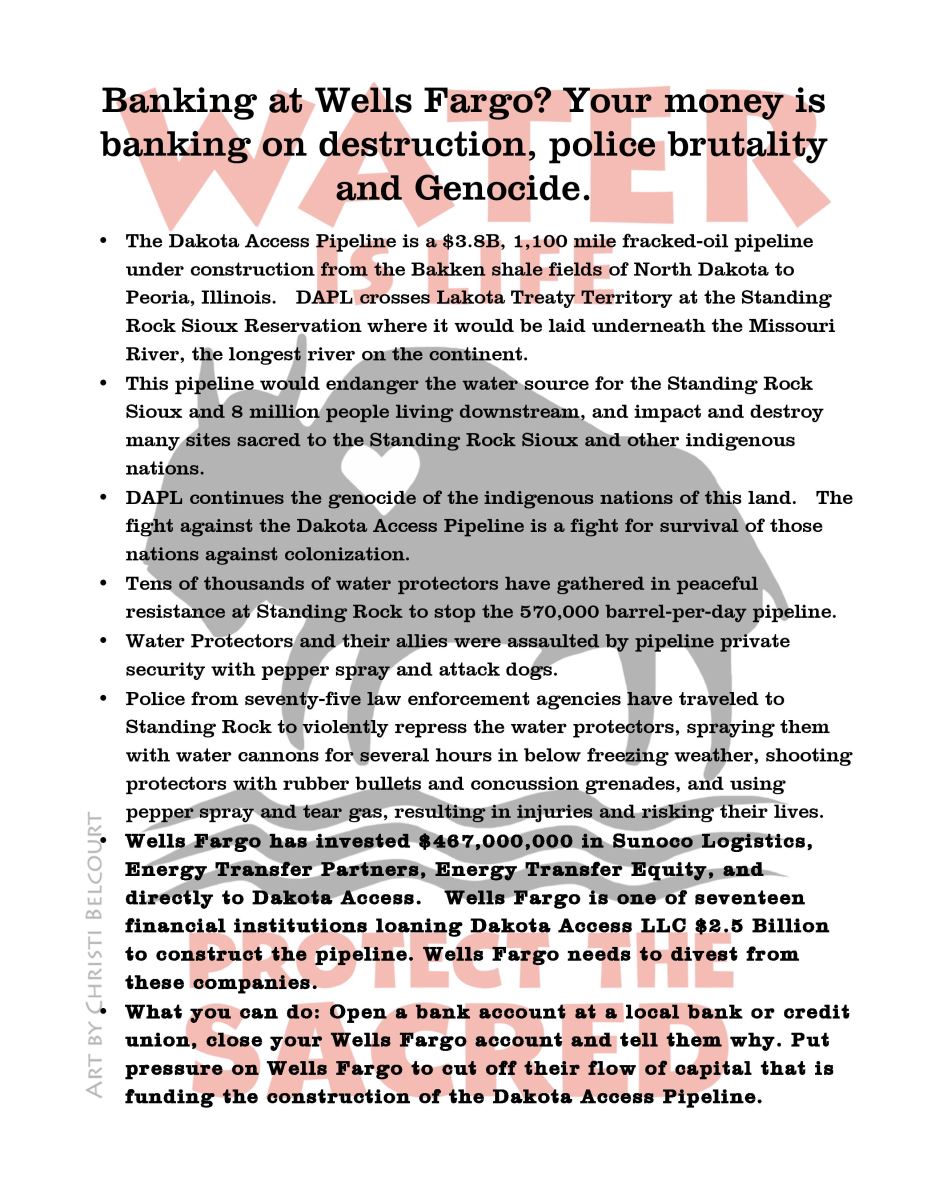 Divestment campaigns work by starving an unethical company from their main motivation for doing harm: money. Because our money is connected to DAPL through the places we do business at home, divestment is a campaign that we can hold in our small towns, with our neighbors and elected officials. Public colleges and town budgets are often invested in banks like Wells Fargo. Many people across the country are now standing with Standing Rock by pressuring their elected officials to move public money away from funding DAPL. Now is a great time to move your own money (be sure to share with your friends, neighbors, and on social media!), hold a rally outside of your local branch of one of the major banks that hope to profit from DAPL, or talk to your local elected officials about where public money is being held and invested.

The struggle in Standing Rock has felt deeply personal for many people across Southern Oregon, where we’ve been engaged in our own struggle to stop the Jordan Cove Project and Pacific Connector Pipeline, a 234-mile fracked gas pipeline that would cross all the major rivers in the Southern half of the state. The pipeline would go under the Klamath River, impacting tribal communities from the Klamath Basin to the Yurok reservation at the mouth of river in Northern California.

Many people from throughout the Klamath watershed spoke out against the pipeline here at home, and also put their lives on the line traveling to Standing Rock and supporting the resistance there. While I was in North Dakota I got an exciting call from home — the Federal Energy Regulatory Commission upheld their decision to deny Pacific Connector — we won! This is the first natural gas export pipeline in the US to be denied by FERC. As with DAPL, the fight to stop fracked gas export through Southern Oregon and Coos County is not over: the Trump administration could overturn this decision. If this happens, it will be critical that we stand with water protectors here at home.

The fight for clean water continues across the country, including in Flint where folks still are still hauling bottled water home because of the lead in their tap water. As we continue to send love and resources to water protectors in Standing Rock, we must also look to the land we live on. This is an opportunity to connect the dots between the fights for Indigenous lands and clean water in Standing Rock to what is happening in our hometowns. This is a crucial moment for human dignity groups to build relationships with Indigenous and Native communities and leadership locally. Seek out the unsung stories about the longer history of where we live. How can we be showing up locally for human dignity and justice? When we allow the fight to change us, to build our resolve for community and solidarity here at home, that becomes one lasting legacy of the sacrifices that people have made at Standing Rock. Water and life depends on it!