Last week was a whirlwind of resistance from across the state! Across Oregon, thousands of people have taken the streets to tell paramilitaries and militia groups to leave Harney County, including 350 folks outside of the Harney County Courthouse who chanted a simple message to the militia occupying their community: you are not our voice! Communities across Oregon stood together to Free Occupied Burns, including Roseburg, Prineville, Cottage Grove, Scappoose, Eugene, Portland, joining Bend, La Grande and Ashland who held actions during the prior weeks. Check out photos from the actions below!

Last Monday, hundreds of Harney County residents closed their businesses, took the day off of work, or showed up during their lunch breaks to stand in front of the Harney County Courthouse to make it clear that the militias are not welcome, do not represent them, and need to leave. Locals held the Courthouse steps as around 150 pro-militia folks, the vast majority of whom were from out of town, assembled in the street. Carrying signs condemning local County Commissioners and the Harney County Sheriff, some people with the militias began harassing, threatening, and intimidating locals, including shouting in their faces and putting orange targets on them. Locals stuck close together, holding the Courthouse steps, chanting, drinking hot coffee provided by the local coffee shop, and exchanging stories of acts of resistance to the militias, including witnessing groups of grandmothers admonishing militia coming to town with Islamophobic bumper stickers.

As a result of a big, bold, and LOUD action that directly confronted and dispelled the militias’ claim that they have local buy-in, we are seeing paramilitaries and militia groups cancel events and head home. The Pacific Patriot Network had called for daily rallies at the Courthouse, but out of town militia supporters decided to head home after several days of receiving no local support. Their action called for last Saturday, which surrounded the four remaining armed occupiers of the Malheur National Wildlife Refuge, was canceled. The “All Call” put out by the 3%ers and Oath Keepers is now off.

Our work is far from over; four armed occupiers continue to hold the Malheur National Wildlife Refuge, Committees of Safety are being set up in several counties as shadow County governments, and “educational events” featuring prominent militia and paramilitary leadership are being scheduled across Eastern OR. Thankfully, national attention means that the media is beginning to dig into the growing militia and “patriot” movement and how they are recruiting local law enforcement. Stay tuned for a more in-depth ROPnet detailing all that is happening and how rural Oregonians are organizing to uphold local democracy!

Below you’ll find more photos of the Harney County action, as well as solidarity actions from across the state. Take a look, share with your neighbors, and celebrate! Together we have raised our voices in powerful and inspiring ways! 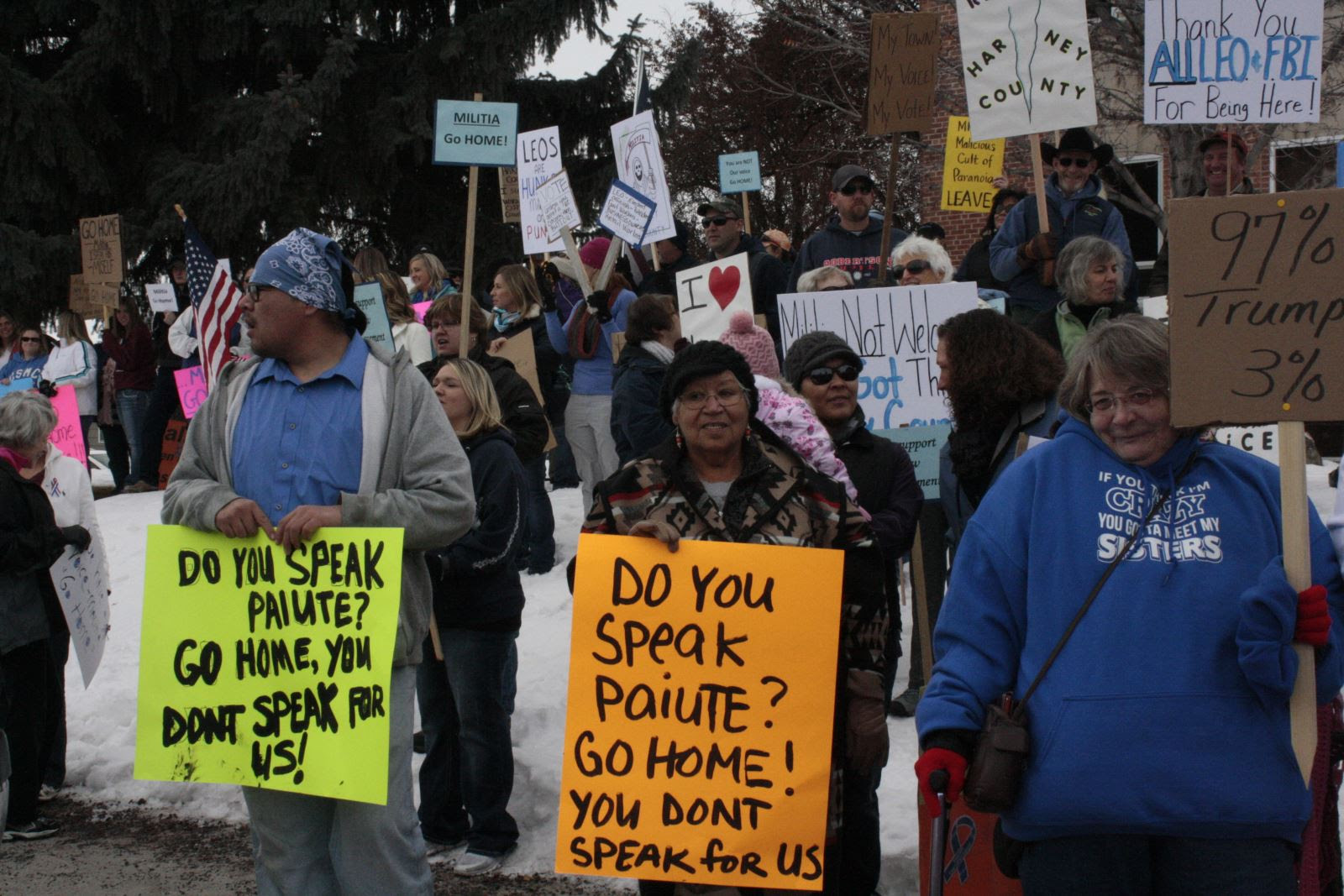 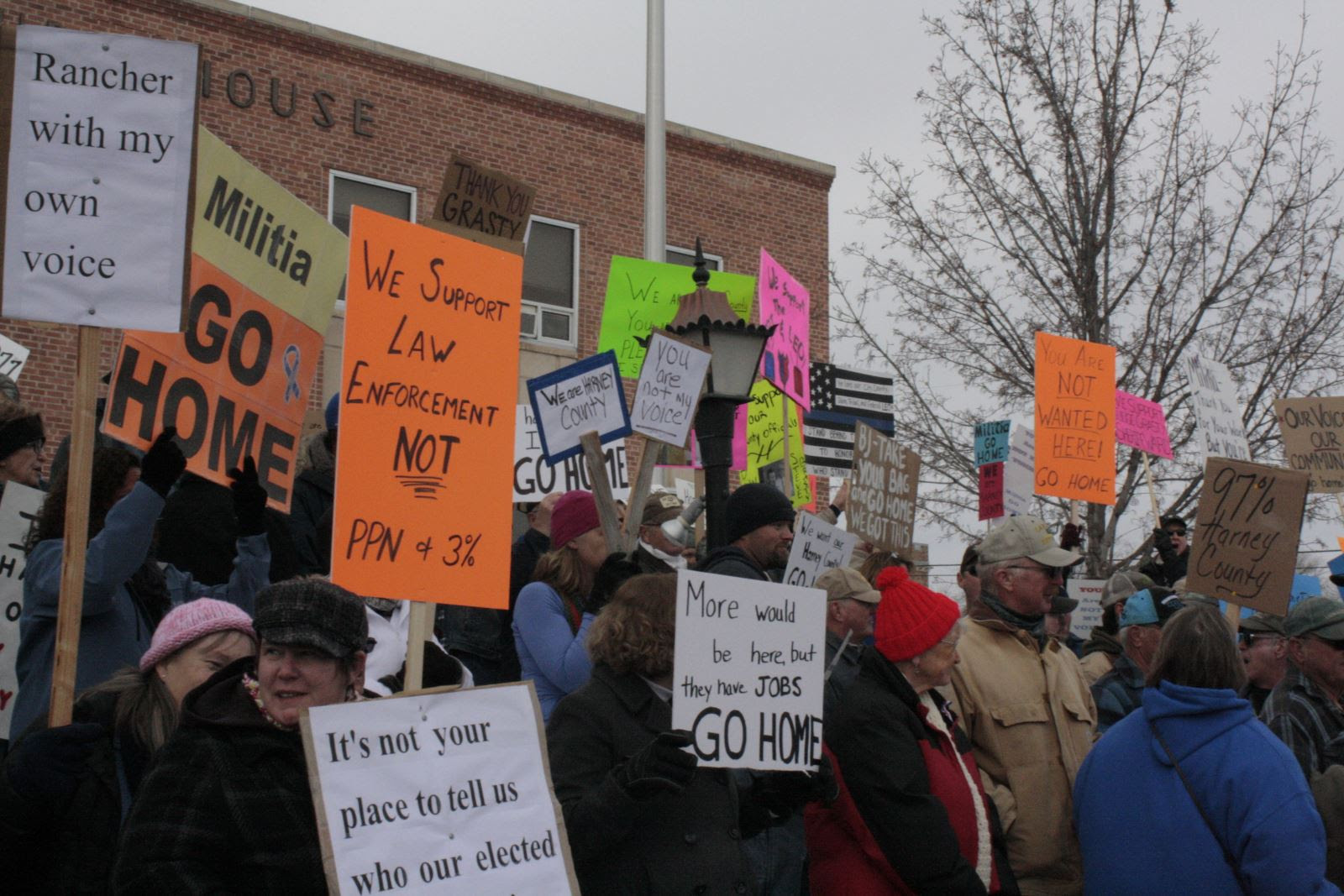 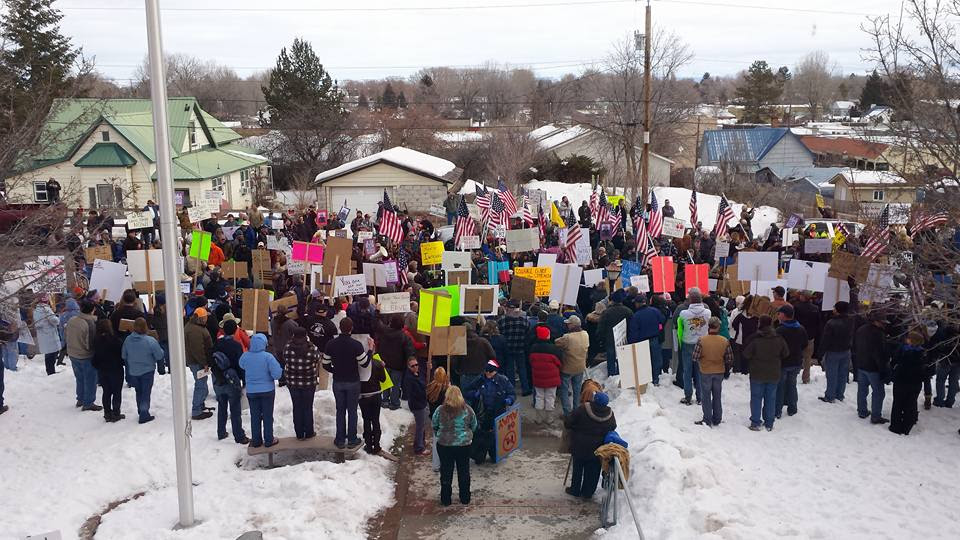 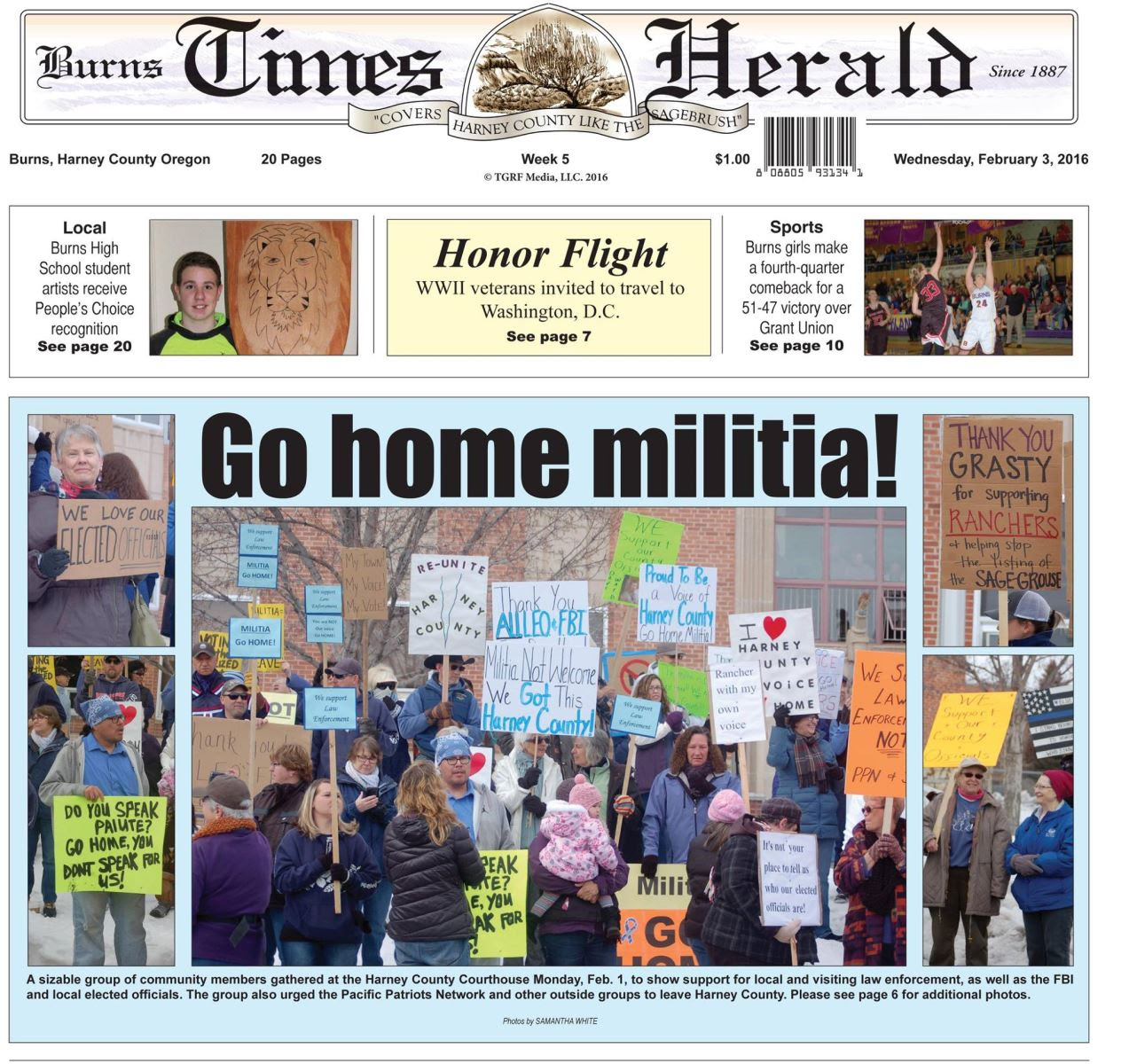 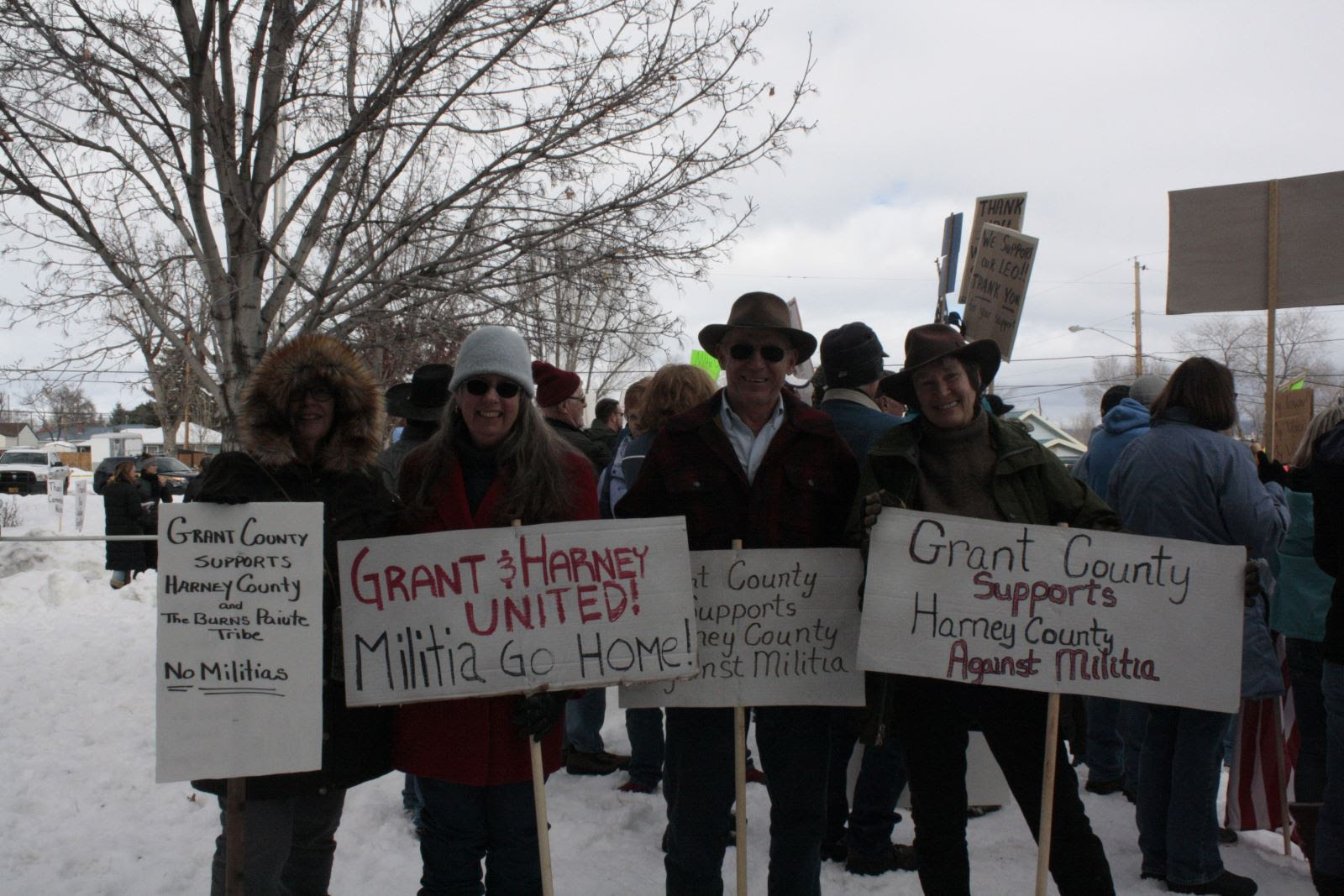 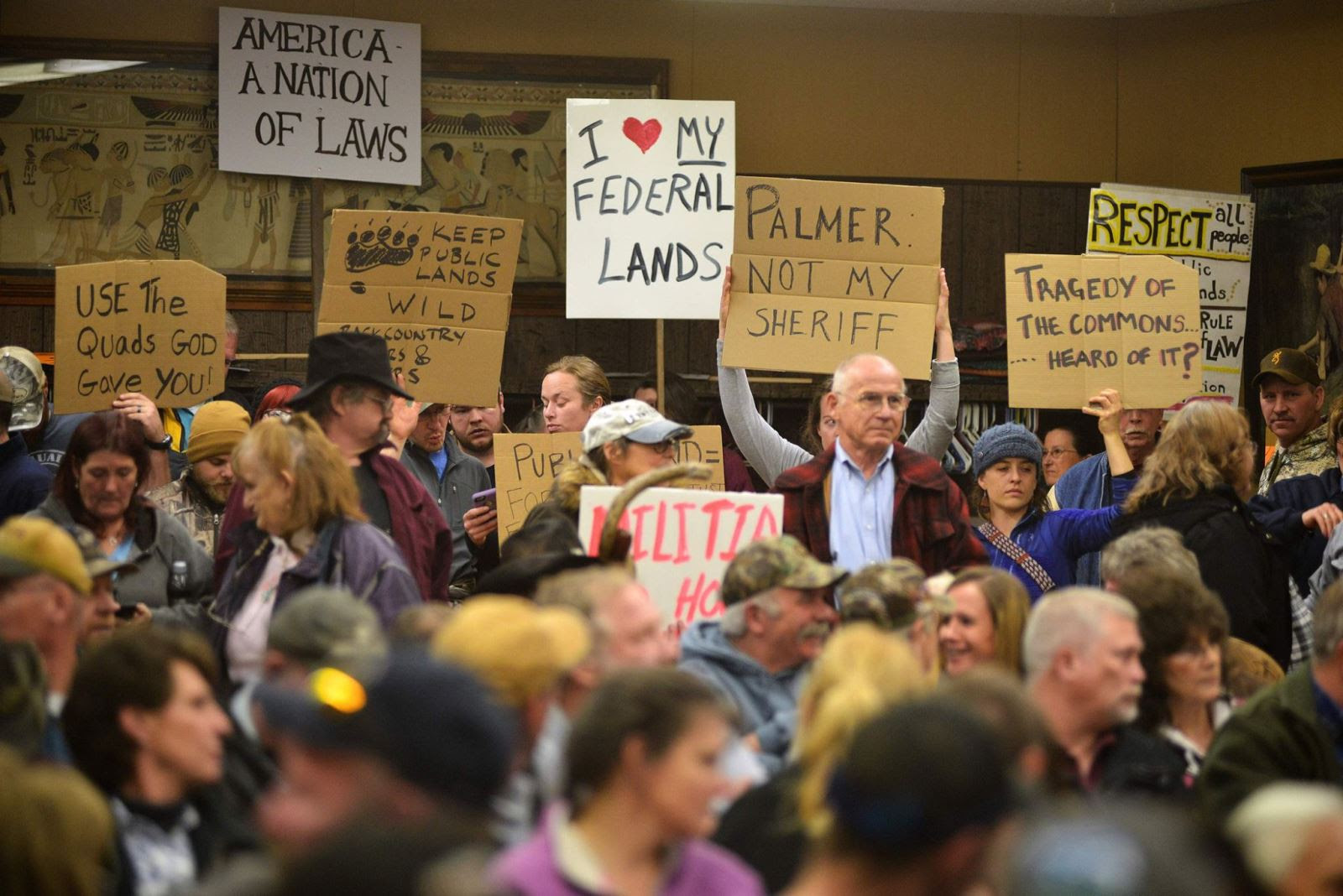 On January 26th, over 50 Grant County residents showed up with signs to protest a meeting called by militia groups who intended to set up a shadow county government. The meeting was spearheaded by the Bundys, one of many meetings in the region where they were attempting to spread the tactics they employed in Harney County prior to occupying the Malheur National Wildlife Refuge. The Bundys and militia groups brought in people from Nebraska, Wyoming, Arizona, and Kansas who got up to speak multiple times. In fact, out of state militiamen tried barring the doors when protesters attempted to enter the meeting — but after an exchange about Constitutional rights, the protesters pushed their way in. Great job Grant County! 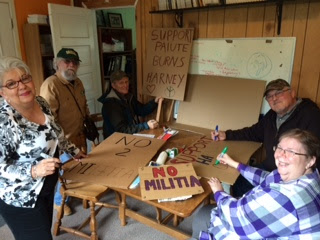 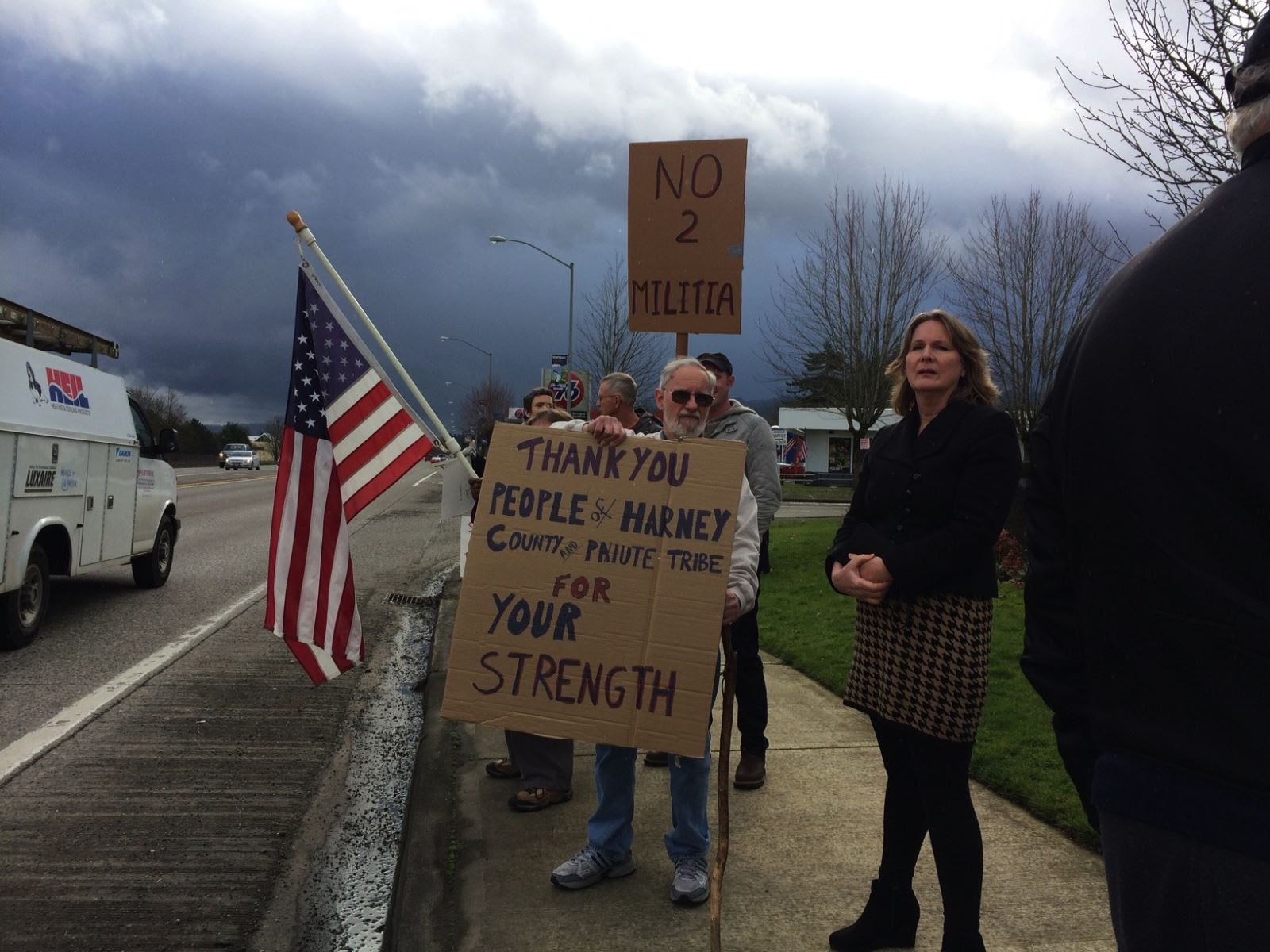 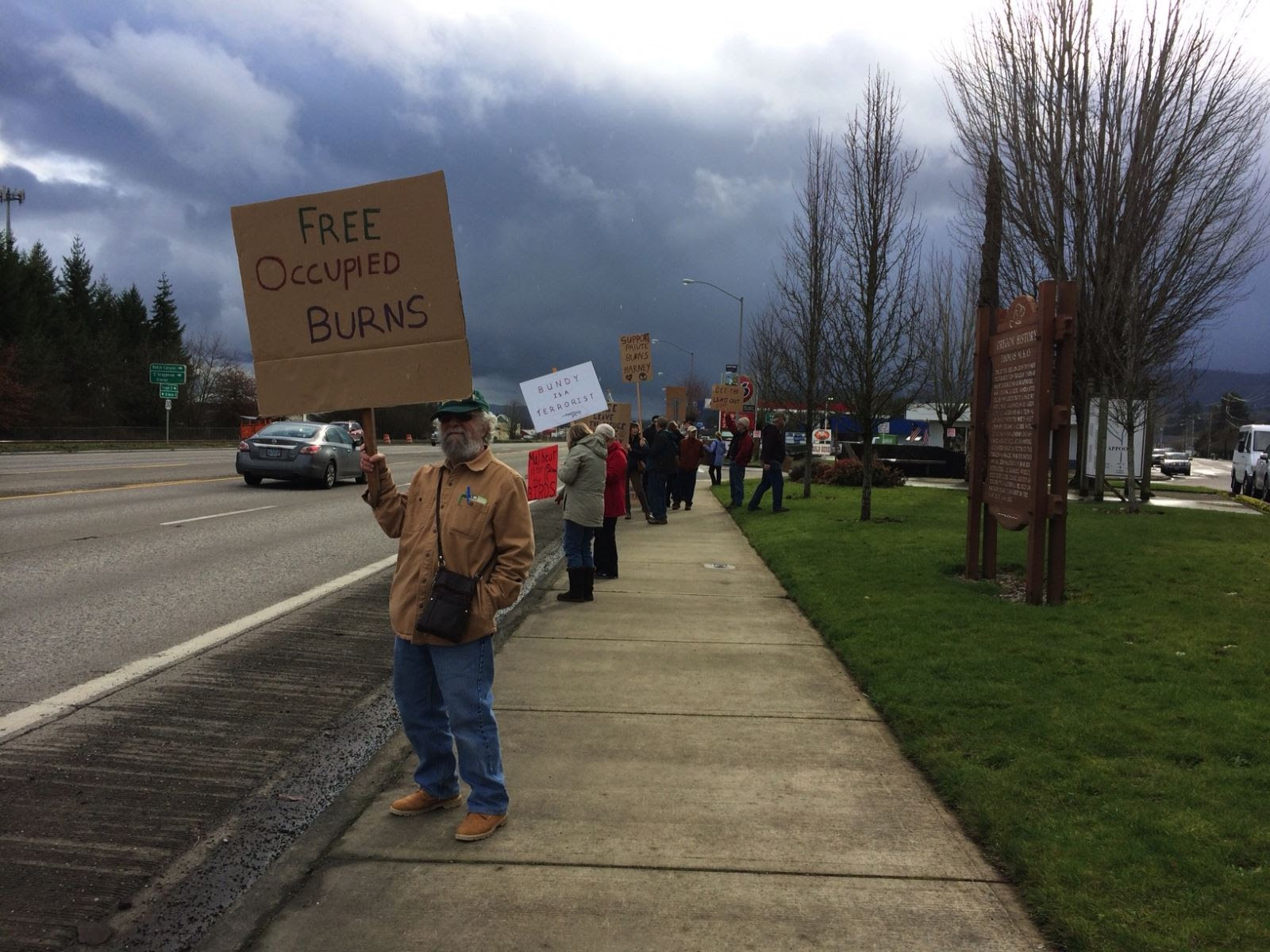 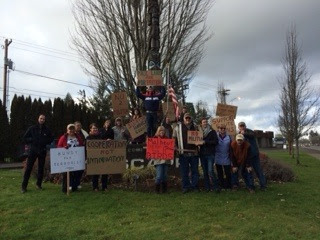 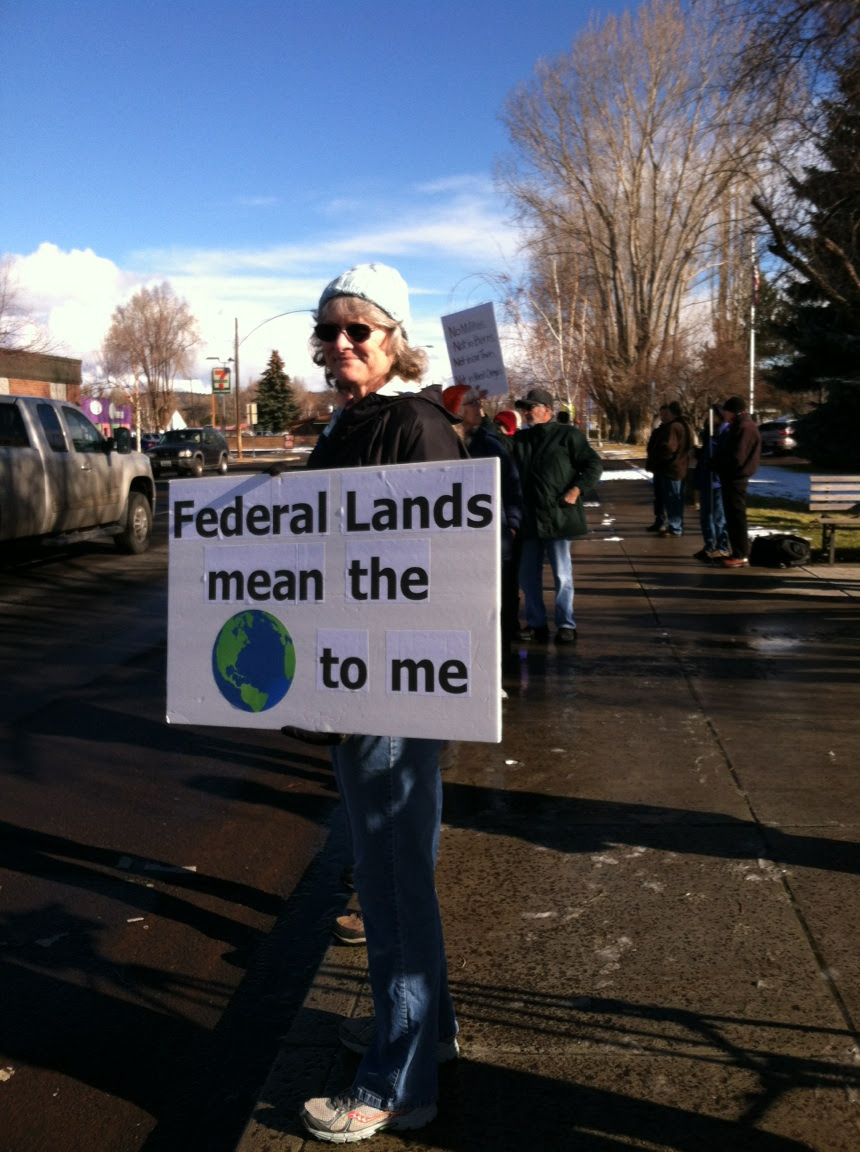 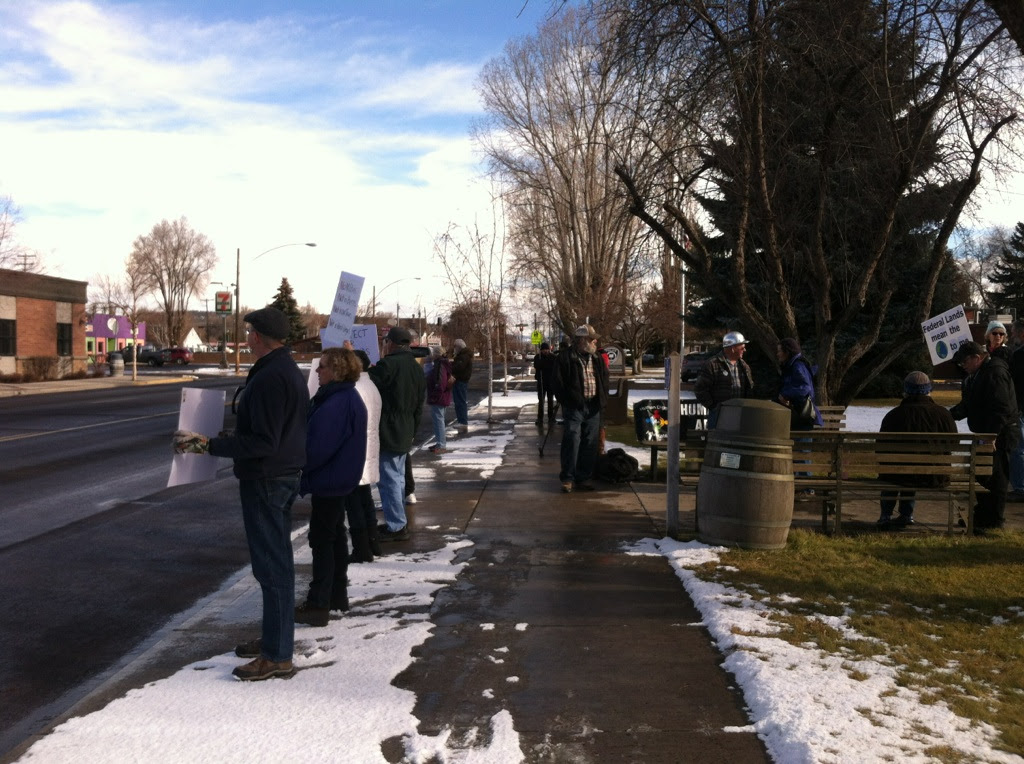 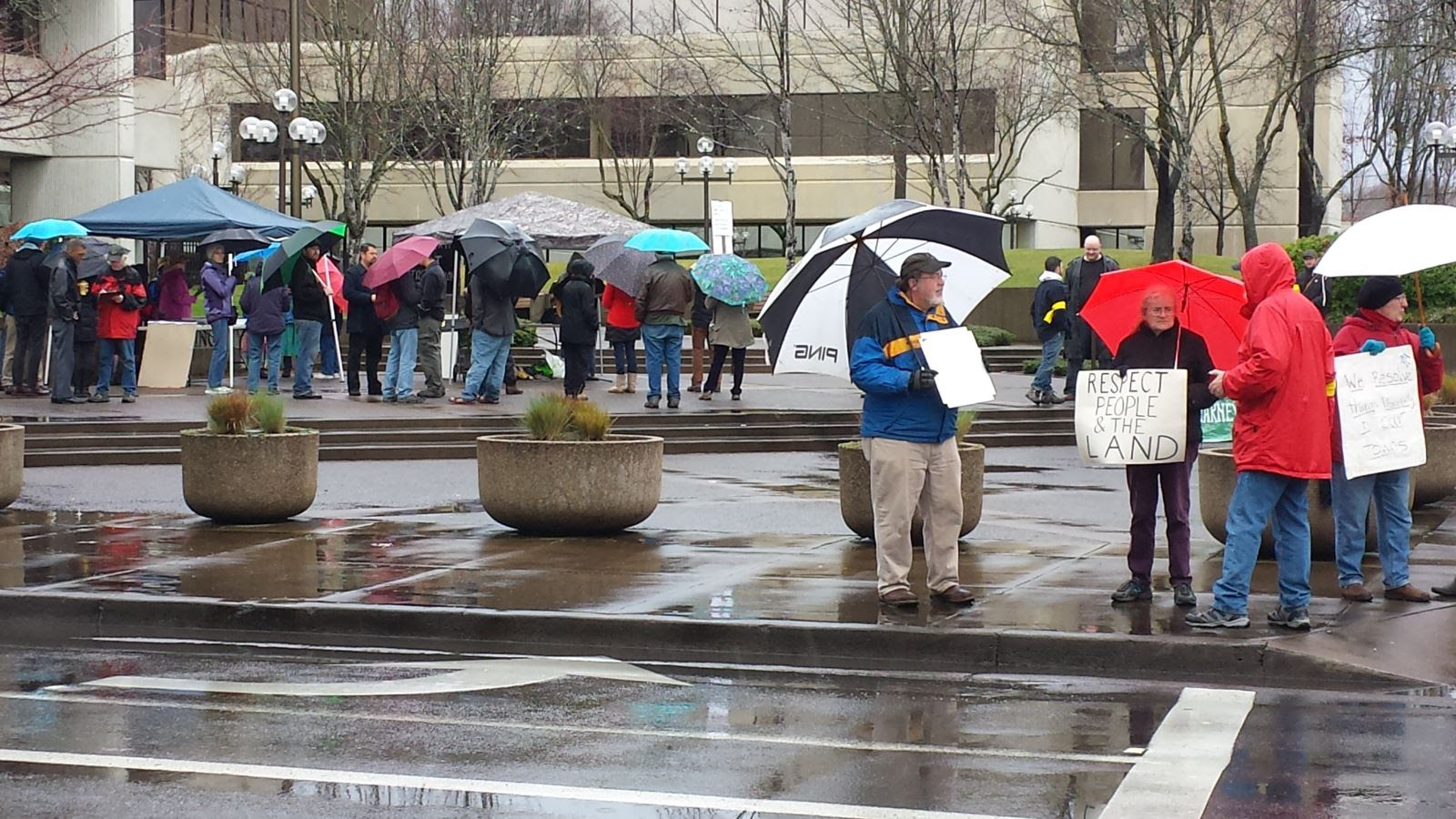 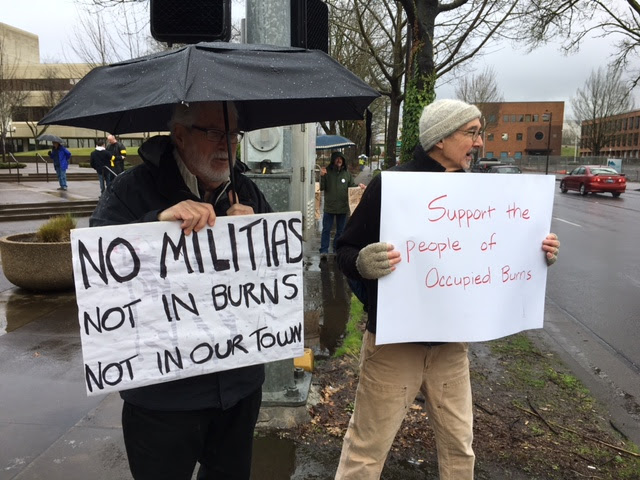 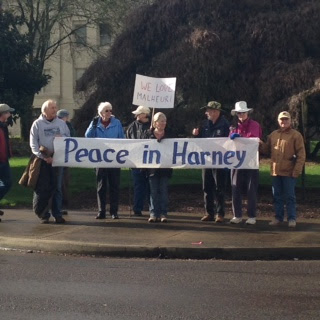 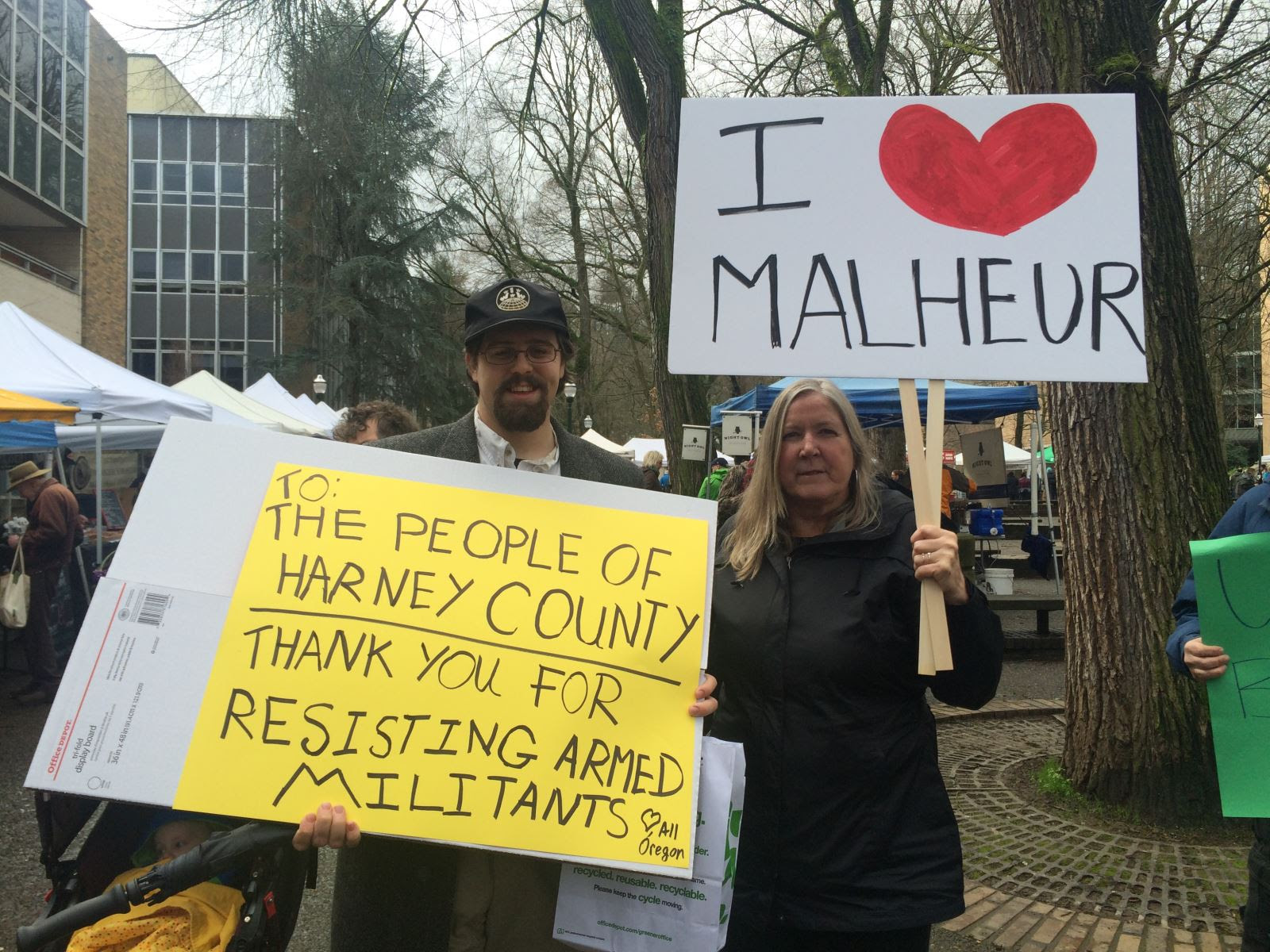