Being a committed human dignity and social justice activist is not an easy life path. At certain times it can be downright dangerous. Other times range from frustrating and exhausting to exciting and energizing. Being such a person in a rural community can be very isolating. Oregon is blessed to have an amazing organization that connects, supports and energizes rural human dignity and social justice activists. For me, ROP is the heartbeat of Oregon’s progressive rural community. And thank you ROP for the annual Rural Caucus and Strategy Session. You help keep us strong!

At the end of the 2013 ROP Rural Caucus and Strategy Session, “that feeling” lingers on.  The feeling is the hope and completeness of belonging to a social movement with deep roots in our hearts and histories, the sense of the possibility, the knowledge that we are making victories happen every day, and we are gaining momentum.  It is such an honor to be a part of this moment in time, this movement, this community.

See photos of the Caucus at the end of this email (thanks to Jerry Atkins)!

It reminds me of what Dancer Davis said during our morning fishbowl conversation when asked what does winning look like and where she hopes we will be in 20 years.  She said, “The thing is that THIS is winning,” as she gestured across 160 justice-seekers from all walks of life and all corners of the state, “it’s just that there is no finish line.”  Living inside of this hope and gratitude is what brings us together, giving us sustenance to be relentless in our organizing for justice.

This year was the largest Caucus in ROP history, at 160 participants from 22 counties.  We gathered outdoors under the beautiful Oregon sunshine under a large tent, hosted by our dear friends and movement allies at CAPACES Leadership Institute (CLI).  We were small-town human dignity activists, of all ages, of all races, working on local organizing from building progressive political power, to bridging the Latino-Anglo divide, to working for environmental justice, to organizing the 99% to combat debt, to saving small-town post offices and building a community commons, to countering the war machine.

Rural leaders from all over the state were brought in with open arms by the inspiring next generation leadership of the Capaces Leadership Institute, rural Oregon and the immigrant rights movement’s brand new leadership institute.  We are especially grateful for the hospitality and inspiration from CLI Executive Director Laura Isiordia, and for the partnership with many wonderful people of the CLI, PCUN, and Causa immigrant rights organizations.

Our invited movement guests helped to bring together the many threads and layers of our movement throughout the day, connecting the dots between our struggles: how the US border war, global capitalism, homophobia and racism in small-town America, violence against women, all affect our abilities to live healthy lives and grow strong, united families.  Kayse Jama, Director of the Center for Intercultural Organizing shared his experience growing up in a nomadic community in Somalia, then moving the Mogadishu, then eventually to the United States, and the ways that we must combat powerful economic global interests with a powerful global social movement.  Yesenia Sanchez, ROP board member from Columbia County, spoke of her deep love for her mixed-immigration-status family and for all of humanity as the guiding force that has led her to “marry herself to the movement” as a young rural Latina woman.  Dancer Davis, ROP board member from Douglas County, discussed the dangers of being an out lesbian in rural Oregon, and the long arc towards building inclusive rural communities.  Luis Guerra, acting Director of Causa, talked about being born less than a mile from the US-Mexico border, and how the militarized border has impacted his family’s health and unity, and ultimately fuels his passion for organizing.  As Laura Isiordia put it, through waves of emotion, “We are all survivors of something” – and with surviving, our hearts grow, and we learn to dedicate that strength to the movement for justice.

We were also honored to have Larry Kleinman of PCUN Farmworker Union, who helped open our Caucus with a briefing on anticipating immigration reform, and understanding of the wave of opportunity that comes with millions of Latino immigrants hoping to become documented.  We were thrilled that Sharon Gary-Smith, Director of the McKenzie River Gathering Foundation could join us in the afternoon to share her inspiring words and personal reflection on the significance of our work.

We were also joined by a powerful ROP Board of Directors, and our new Latino Advisory Board, that is leading our movement towards a smart, deep, and strategic direction in our strategic planning process of 2012-2013.  Thank you to these powerful folks for your leadership in the Caucus, and year-round.

ROP Founder and Open Society Fellow, Marcy Westerling and, Sarah Loose, ROP’s Roots and Wings Coordinator, introduced us to their project the “The Rural Organizing Cookbook: Recipes for Justice from Rural Oregon’s Grassroots Movement for Human Dignity.”  The Cookbook will capture the ROP and human dignity group organizing model over the last 20 years.

Then, on Sunday, we welcomed Nina, Cynthia, and Jen from the Western States Center, who led us through a morning of Dismantling Racism 101, attended by 35 of the 70+ people who applied (due to space limitations).  Thank you to those who attended, and to those whose hearts were with us.  We are committed to expanding our trainings around racism to rural communities across the state in the coming year.

Though I could go on about the thousand nuggets of inspiration, hope, and solidarity, for now, I will leave you with a few of the bigger chunks of gold to come out of the 2013 Caucus.

A few of the lessons to take home:

As staff of the ROP, this year we felt the huge ownership and pride that all of you human dignity activists take in our rural justice movement.  From giving smart thinking on our direction in the next 20 years, to spending hours setting up at the CLI the day before the Caucus, to leaving your homes at 3am to make it on time, to volunteering to prepare and facilitate workshops, it is clear that this is a movement and a community that is not only being effective at shifting our state towards justice, but that also has huge commitment and even bigger heart.  Thank you, thank you, thank you.  It is an honor to serve you all.

With pride and respect,
Amanda, Cara, and Jessica – ROP organizers

PS. Look for other ROPnets in the coming weeks about this year’s human dignity award recipients, our new Latino Advisory Board, new additions to our Board of Directors, and other updates that you may have missed if you weren’t able to make it to the Caucus this year. 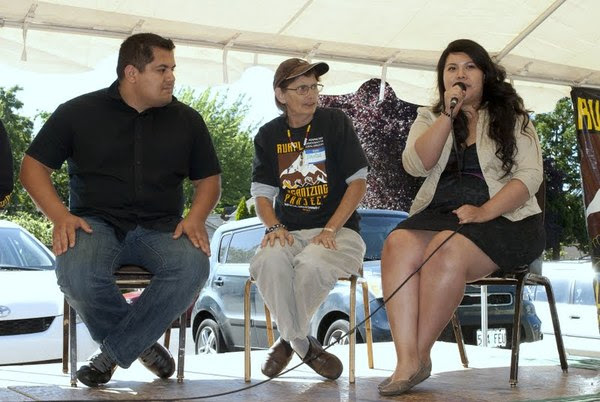 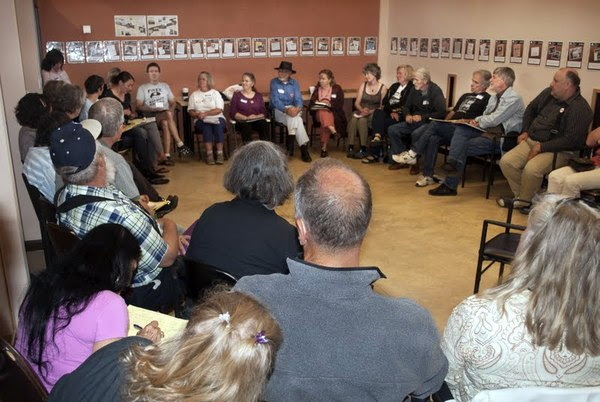 The Strategy Sessions were packed!  Both with people and with deep thinking and conversation. 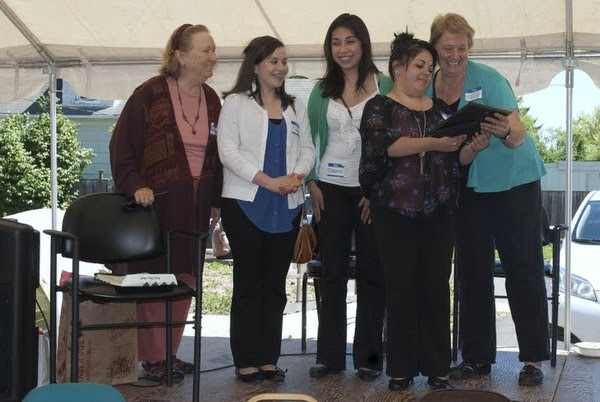 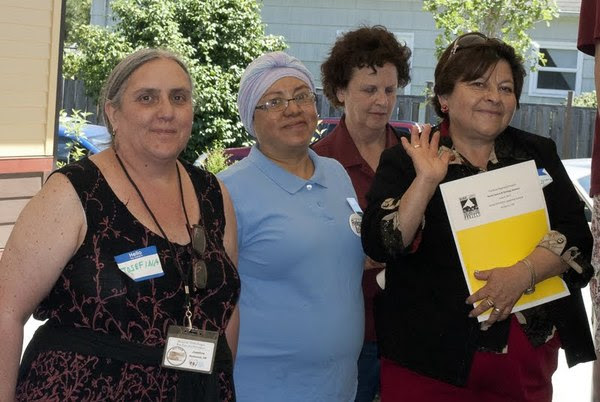 Friends are reunited from 4 different counties, all participants on the March for ONE Oregon earlier this year. 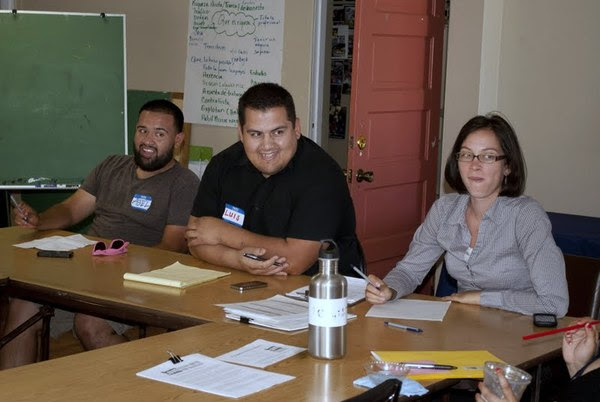 The Latino Think Tank was a Spanish language workshop that brought Latino leaders together from across the state. 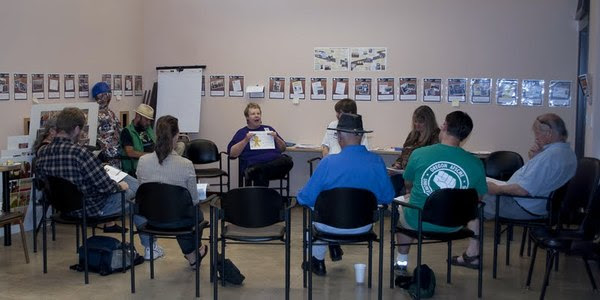 Volunteer leaders stepped up to lead workshops, like this one on talking LGBTQ, led by Jeanne St John of Lincoln County. 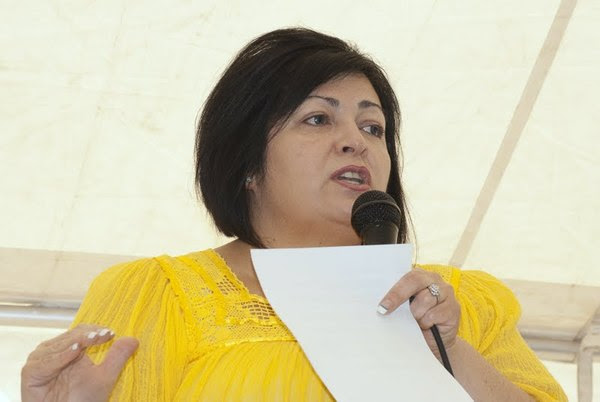 We can’t thank you enough Laura Isiordia, Executive Director of Capaces Leadership Institute, for your hospitality!