The March for ONE Oregon has been on the road for 2 1/2 days. Spirits are strong among riders as hundreds gather at every stop to welcome them into the community and advocate for dignity for immigrants across the United States. Below you will find a report from the first two days of the tour.

Check out this short video from the 1st day of the March for ONE Oregon. And this one. 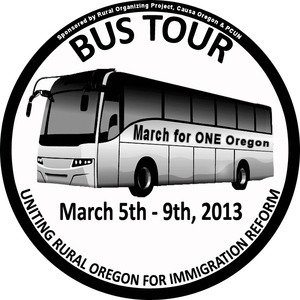 This trip has not been met without hardship and tragedy.  Trinity Episcopal Church in Bend, host to the kick off dinner for the Tour, was the victim of arson at 2am following the event. Even after this tragedy, the church affirmed their support for the tour and asked riders to continue on their trip, sending along one of their own members to join for the final 4 days. The Oregon State Police, the Oregon State Fire Marshal, the FBI and the ATF have been brought in to investigate. The White House and the other 18 states participating in the Bus Tour have been notified. Oregon Bus riders are making plans to support the church on their return to Bend, starting with a vigil on Saturday night.

As one rider shared, “Today, our hearts go out to our compañeros at Trinity Episcopal Church, who are staying strong and clear in our vision, even in trying times.  We are not the first to go through these challenges and attacks, and will not be the last, but we are showing that it only will make us stronger.”

Please share your support for Trinity Episcopal Church. Send them a card and let’s make sure they know rural Oregon is here for them in these trying times.  Mail your card to: 469 NW Wall Street Bend, OR 97701

Read on for updates from the March for ONE Oregon’s first few days on the road!

Warmly, Cara
(on behalf of ROP’s March for ONE Oregon Bus riders)

The March for ONE Oregon bus tour for immigration reform kicked off Tuesday morning in Bend, Oregon.  More than 40 bus riders, members of the Rural Organizing Project, CAUSA Oregon, and PCUN Farmworkers Union, the majority from Central and Eastern Oregon, joined with local supporters to march to Congressman Greg Walden’s office to deliver dozens of letters supporting immigration reform with a fast path to citizenship for the 11 million undocumented people in the country.  A smaller group of 6 had met with the Congressman’s staff the day before to share personal stories and our priority to restore civil, human, and labor rights to all immigrants.  The group then held a colorful march, despite the rain and hail, to Trinity Episcopal Church where they were received with a blessings from local Pastor Ron Werner, Aztec Dancers, and a Muslim prayer.  Two immigrants who have recently qualified for Obama’s deferred action program spoke about their lives growing up undocumented in Oregon in mixed-status families, along with speakers Kathy Paterno, Rural Organizing Project’s board chair, and CAUSA Oregon’s Executive Director Francisco Lopez, who are part of the bus tour.

The group’s second event at St Patrick’s Catholic Church in the small town of Madras drew a crowd of 150 participants, who over a shared meal heard the emotional testimonies of 2 recently documented immigrants from small-town Oregon, and then got out their phones to make nearly 100 calls to Congressman Walden’s 4 offices.  Many participants spoke directly with the Congressman’s aids, and continued flooding the offices with calls until the voicemail boxes were filled.  Drivers license restoration and the need to reduce rural isolation were main topics as well.

We drew press from the national Radio Bilingue with 70 outlets nationally, Bend newspaper the Source, local TV coverage on KTVZ, and local radio coverage.  In the afternoon, Congressman Walden released a statement saying “Our federal immigration system is broken, and fixing it is certainly a priority in the congress. A bipartisan group of lawmakers in the U.S. House have been working on a plan to update our immigration laws for over a year, and I look forward to reviewing their work. As this process moves forward, I value input from Oregonians of all points of view, and I look forward to continuing a dialogue on this complicated issue.”

Our day started with some tough news, as riders from the March for ONE Oregon watched on local Central Oregon TV station KTVZ that Trinity Episcopal Church that hosted us in Bend yesterday had a fire, which is being attributed to arson.  We watched the smoke and flames leap from the same chapel that had hosted us less than 24 hours earlier, and let the reality sink in that this path we walk is not easy, but that la union hace la fuerza.  We decided that this incident would make us stronger, and bring us even closer with our movement leaders at Trinity.  While we are horrified that our peaceful and life-affirming events for immigration reform could be followed by such violence, we are grateful for the solidarity of those at Trinity, who continue to affirm their support for our mission, and gratitude at being a part of our March.  To solidify this commitment, Betsy Lamb, a congregant of Trinity Episcopal, drove to Hood River to join us today on the bus and will participate in the remainder of our 3 state tour.

At our noon event in Hood River, we were met with an enthusiastic crowd of 150, including Neal Holste, Chief of Police, Mayor Arthur Babbits of Hood River, Charles Beck, the school superintendent, and Les Perkins, one of the Hood River County Commissioners, and local orchadist families, who are the backbone of the local economy.  We shared stories from bus riders and local families who have been impacted by poverty, migration, and suffered the fear caused by our unjust immigration laws.  We took a moment of silence for our allies at Trinity Episcopal Church, who suffered an arson attack last night after hosting the March for ONE Oregon bus tour.

In Hermiston we were met with support that expanded our hearts and stoked our fires even more than we could have imagined.  We met a crowd of 400 Immigration Reform supporters at a packed press conference at the City Hall.  Then 300 riders and supporters braved the cold and rain to march over a mile during Hermiston’s rush hour to El Chaparral Shopping Center for a Celebration for Unity and Immigration Reform.  We shared stories with the United Farm Worker of America, the Umatilla Morrow Alternatives, and the local Hispanic Advisory Committee recently formed at the City of Hermiston.  We learned about how the City has recently passed a resolution in support of immigration reform, and will be traveling to the White House to receive recognition for the community-building work to integrate immigrants and build one community.  The event was followed by dinner, music and dancing.

Today, our hearts go out to our compañeros at Trinity Episcopal Church, who are staying strong and clear in our vision, even in trying times.  We are not the first to go through these challenges and attacks, and will not be the last, but we are showing that it only will make us stronger.